St. Marks Is Dead: The Many Lives of America's Hippest Street 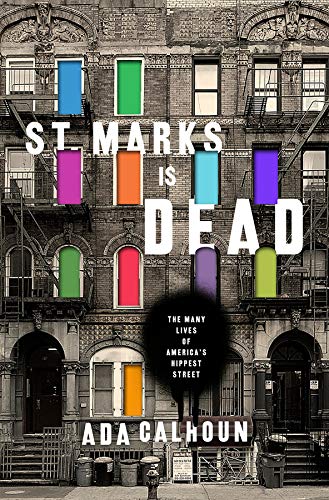 St. Marks Place is but a few small streets in downtown New York, but it has been a breeding ground for artists, politicians, and cultural shape-shifters for more than a century in a way that far exceeds its physical boundaries.

That is the idea behind this book, and it is a good one. It is a constellation of important names from Peter Stuyvesant, one of the original leaders of New York, all the way to artist Keith Haring, singer Debbie Harry and of course Andy Warhol.

Writer Ada Calhoun is certainly the right person to document this all-encompassing history since she grew up on St. Marks. And the not-so-inside joke of the subtitle is that St. Marks is never really dead and never will be. No matter which era you lived on the street, some old-timer was always there to say: “You should have seen it in the old days.”

Calhoun tries to do right by St. Marks by beginning with its origins as Stuyvesant’s farm, his retreat from the world. St. Marks a retreat? It’s true and interesting, but too much time is spent on a very distant past.

This book gets some juice when we get into the more recent present, the days of radio personality Jean Shepard and Andy Warhol and Norman Mailer (founder of the Village Voice).

The author correctly makes the point that perhaps more than anything St. Marks Place is a state of mind.

“St. Marks Place is like superglue for fragmented identities. The street is not for people who have chosen their lives—the married, the employed, the secure, the settled. The street is for the wanderer, the undecided, the lonely, and the promiscuous. St. Marks courses with sexual energy and opportunity. This perhaps more than any other reason is why people say that the street is lame and dead after they stop hanging out there. Lust is a kind of drug. Once it wears off, you may be left feeling embarrassment, confusion, and wistfulness about how you acted under its spell.”

Calhoun relays someone’s observation that the street, while bursting with energy and excitement at night, looks dirty and washed out in the daylight hours. The metaphor used is that it’s like a bunch of fireflies. You capture them at night and put them in a jar with holes in it and it looks wonderful but, in the morning, you’re left with a bunch of dead bugs.

Books like this go for the wide shot, showing you everything rather than zeroing in and telling you the inside story of one person. It’s a daunting task and at times, feels like it’s too much. One wonders if the book will become a victim of its extensive index where readers will just thumb to the areas they’re interested in and exclude the rest. It is tempting to breeze by the early history of the street.

There are some very captivating and sometimes funny tales along the way, like the one photographer Roberta Bayley recounts on the day in 1986 when she decided St. Marks was over. Why? Because singer Billy Joel spent an entire day filming the video for his song, “A Matter of Trust.”

As Calhoun writes: “[Billy] Joel’s presence undermined the East Village’s identity. There was nothing remotely cool about Billy Joel. When he commandeered the street for a full day of singing about the joys of long-term romance built on a solid foundation of mutual faith, it proved to cynics—those whose identified St. Marks instead with Ramones values like “I Wanna Be Sedated”—that the commodification of 1980s music and culture was complete.”

In the end, it’s clear that St. Marks Place is a stand-in for our youth. We can’t help remembering the exciting times we had when we hung out there; it’s not just the same anymore. But as Calhoun knows, maybe the street is not the same but it’s different and 20 years from now, there is no doubt some 40-something year old will remember the exciting and daring times she had on the street when she was young.