Spying on the South: An Odyssey Across the American Divide 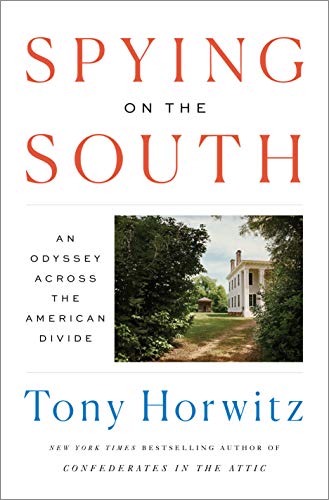 "Spying on the South . . . goes deeper, darker, and makes stronger ties between the past and the present South than other of Horwitz's works."

Tony Horwitz continues his social disaster tourism from West Virginia to Texas in Spying on the South. Anyone wondering how Trump became president should read the opening chapter on a visit to a down and out town where he saw "children staying home on Halloween because there were real zombies about [drunks and junkies]."

The author follows Frederick Law Olmsted who, beginning in 1853, "by train, stagecoach, riverboat, and horseback" traveled the South. Only a few years before the Civil War, Olmstead watched as the "fragile political compromise that had held together the North and South began to collapse."

Stops in "Nashville effectively extinguished Olmsted's faith that middle ground could be found." He doubted that enough southerners remained "to recognize the evils of slavery."

Both travelers respectively found themselves "becoming numb to the extravagant wealth on show at plantations." Each writer also writes of hard work that paid little and proved physically dangerous if not fatal, from coalmines to sugar fields.

Horwitz finds in his modern journey "inescapable echoes of the 1850s: extreme polarization, racial strife, demonization of the other side, embrace of enflamed opinion over reasoned dialogue and debate." Differences exist. Olmsted did not see closed factories or empty storefronts.

West Virginia proves a particularly good example of the history in the South and the Midwest. Its residents opposed slavery and supported the Union in the Civil War. Downturns in industry brought about how "West Virginia—staunchly Democratic in the twentieth century—had turned strongly Republican in recent elections."

Riches "mostly flowed out of the state, leaving behind poisoned streams, blackened lungs, crippled limbs, and communities mired in poverty and isolation." Olmsted witnessed the beginnings of this economic, environmental, and human tragedy. Horwitz arrives at the end.

Olmsted encountered numerous colorful characters in rural areas while trying to find bed and board. Olmsted met gentlemen who fought duels over honor at the risk to life and limb, Horwitz met southerners who would fight for a hopeless cause to the end.

Horwitz did the same.  He also visited Point Pleasant, the most accursed town in America and the home of the Mothman, toured the Creation Museum, took passage on the American Queen, interviewed inmates at Angola prison, and attended Louisiana's monster truck Mud Fest.

As with Confederates in the Attic, Horwitz will come across to many readers as a patronizing prejudiced Yankee. One might think of the southern sheriff in Deliverance asks if his community could just be left to die or the oblivious FBI agent from the North in Mississippi Burning.

Spying on the South, however, goes deeper and makes stronger ties between the past and the present of the parts of the South that Horowitz visited than the author's other works. It also covers the northern and western edge of the southern states, not the "heart of Dixie."