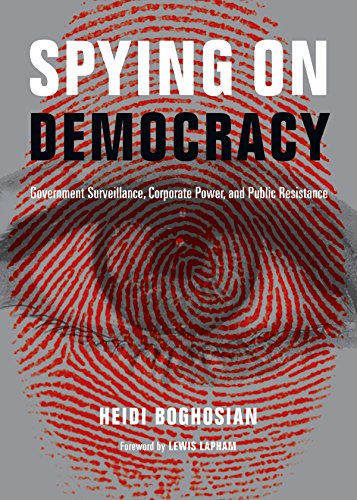 The recent leaks by Edward Snowden regarding the National Security Agency’s (NSA) surveillance program (which apparently occurred too close to the publication date to be included in this volume, although Ms. Boghosian does discuss earlier NSA monitoring activity) makes this book highly relevant.

As she aptly writes in her introduction, “From the minute you wake up, your everyday activities are routinely subject to surveillance. Retailers capture consumer data and sell it to data aggregators, telecommunications companies hand over records of customer calls to government agencies, and personal data shared on social media platforms is readily available to businesses that may share it with the authorities.”

Ms. Boghosian, who is the executive director of the National Lawyers Guild and cohosts a weekly civil liberties radio program, Law and Disorder, then presents an exhaustive account of government, law enforcement, and corporate surveillance of a wide range of individuals and groups. These include cyclists during demonstrations in New York City, environmental activists, lawyers, members of the media, and even children, whom the author argues are the targets of corporations who “use clandestine methods on the Internet and elsewhere to extract children’s private information, to condition them to accept surveillance and to mold them into unquestioning consumers.”

Ms. Boghosian is forceful in her arguments throughout the book. While her passion for the subject matter is to be admired, the main problem with Spying on Democracy is that it reads more like an anti-government, anti-capitalist, and anti-technology manifesto than a serious, objective treatment of the important issue of how to protect privacy rights and civil liberties in an age of breathtaking advancements in technology and information gathering techniques.

Even in her brief discussion of the bombings at the Boston Marathon last April, Ms. Boghosian criticizes the use of surveillance cameras, noting that many retail stores provided police investigators with video footage of individuals walking on surrounding sidewalks near the finish line where the bombs exploded. She writes, “This convergence of government and business intelligence operations has created all the elements of an Orwellian mass surveillance network. . . .”

Ms. Boghosian fails, however, to acknowledge the potential value of closed circuit television (CCTV) cameras in both preventing and responding to terrorist attacks. For example, research is currently being conducted to determine if camera systems can identify an individual who may be hiding a bomb by the way he or she is walking.

Had that technology been available and used at the Boston Marathon, then CCTV cameras might have been able to signal to the authorities that the Tsnarnaev brothers, rather than having running gear in their backpacks, were actually carrying bombs. Furthermore, it was video images, including those from individual cell phones, that helped the authorities identify Tamerlan and Dzhokhar Tsarnaev as the Boston bombers.

It is also important to note that combating terrorism is a never-ending technological race. Technological advancements are there for all to take advantage of, including a wide range of extremists.

The goal is to try to stay one step ahead of the terrorists, who can adapt to new security measures by changing their tactics or by using more sophisticated and lethal weapons. Terrorists today are technologically savvy and are also using the Internet to communicate with each other and advance their plans.

That is why monitoring the Internet, without violating law-abiding individuals’ civil liberties, is an important tool in the fight against terrorism.

Ms. Boghosian is a gifted writer and the narrative flows smoothly for most of the book. Her last chapter is a passionate call to action where she implores everyone to protest government and corporate surveillance. She writes in her concluding sentence, “All who resist are the custodians of democracy.”

The issue of surveillance, however, is not as black and white as portrayed in this book. Those who use surveillance in an effort to prevent terrorist attacks or capture terrorists can also, at times, be considered “custodians of democracy.”

Spying on Democracy would have been a more effective book and would have appealed to a wider audience if instead of pounding the reader with repetitive statements about the evils of big government, capitalism, and technology, Ms. Boghosian presented a more nuanced argument.

Still, to her credit, she wrote a book that is relevant to the ongoing debate about how to protect civil liberties and privacy rights in the technological age that we all live in. It is an issue that is not likely to fade away anytime soon.