The Spy Who Was Left Behind: Russia, the New Cold War, and the True Story of the Assassination of a CIA Agent 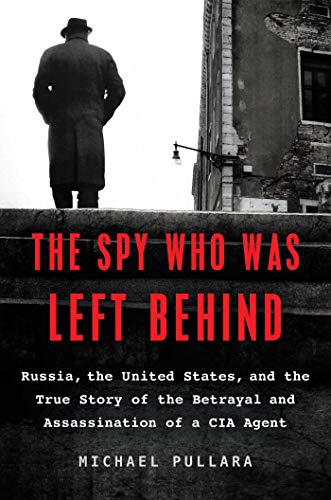 “The Spy Who Was Left Behind tells a fascinating story of one man’s quest for the truth, even if that meant putting his own life at risk for someone he had never met.”

Texas lawyer Michael Pullara’s decade-long quest to free an innocent man in the former Soviet Republic of Georgia provided him with a new appreciation for the U.S. justice system, which, imperfect though it may be, is the best in the world. In The Spy Who Was Left Behind: Russia, the United States, and the True Story of the Betrayal and Assassination of a CIA Agent, Pullara takes the reader along on his quest as he negotiates an obstacle course of lies, deception, corruption, political interference, and personal danger.

In 1993, a CIA officer named Freddie Woodruff was killed in Georgia, supposedly during an attempted carjacking by a drunken young soldier named Anzor Sharmaidze, who was arrested, summarily tried and convicted, and sentenced to prison. Case closed. Closed, that is, until Pullara got involved.

Having just completed an investigation into the death of his father in the Vietnam War, which revealed deception on the part of the U.S. air force, Pullara was ready for a new mission. Intrigued by an article about the Woodruff killing in The New York Times, Pullara, who had been a childhood friend of the victim’s sister, dug deeper and found cracks in the Georgian authorities’ case that suggested Anzor had been railroaded.

Pullara also discovered an unlikely coincidence: Anzor’s conviction was handed down less than two weeks after the FBI arrested another CIA officer, Aldrich Ames, for espionage on behalf of Russia. “The carefully constructed official version seemed to be coming apart and what was left in its place was a tantalizing mystery,” Pullara says.

Noting that newspaper pundits referred to “super-empowered angry men” as agents of change, he notes, “I was no super-empowered angry man. But I was a moderately-empowered curious man.” What could he do, though, “with a law license, a passport, and a credit card?” The Spy Who Was Left Behind tells a fascinating story of one man’s quest for the truth, even if that meant putting his own life at risk for someone he had never met.

Pullara attacks the problem as a good lawyer would attack a legal case, methodically examining documents, interviewing witnesses, researching, making site visits, using the press, and ultimately pursuing relief in the courts, albeit of a foreign country, which required him to become licensed to practice law in that country. “I had studied the divine mysteries of the Constitution,” he writes, “and been invested with the sacrament of due process. I could invoke the arcana of Law and perform the miracle of Justice. But my religion wasn’t practiced in Georgia.”

Pullara’s initial hurdle was to find a client, to give himself legitimacy. That client was his old friend, the sister of the murdered man, who agreed to allow him to represent her in getting to the truth behind her brother’s murder. But in order to exculpate Anzor, Pullara needed to find out who the real killer was, which created a new set of problems.

It quickly became clear that this might not have been a carjacking gone wrong but was more likely a government-sanctioned assassination. But what government? Intrigue heightens, and the stakes rise when the author discovers a possible connection between the spy Aldrich Ames and Russian involvement in Woodruff’s death.

“Accordingly, I would argue that new evidence proved Anzor’s innocence,” he writes. “But I would demand on behalf of the Woodruff family that no additional prosecutions be undertaken—either for Freddie’s murder or for Anzor’s wrongful incarceration.”

Against great odds and motivated by nothing more than a sense of justice, Michael Pullara sets a standard for idealistic attorneys to strive for. Whether he succeeded or failed is not the heart of the matter; it’s the fact that he tried. The Spy Who Was Left Behind tells that story.