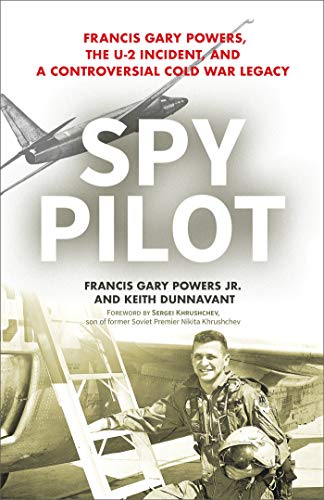 “Spy Pilot is a compelling read of the forgotten heroism of a father and the determination of a son to bring that heroism to light.”

Francis Gary Powers Jr. grew up not fully understanding the stigma surrounding the man whose name he bore. To him, Francis Gary Powers was just his dad but, to much of America, he was the U-2 spy plane pilot who was shot down over Russia and who may have been a hero or may have been a traitor. It was Powers’ death in a helicopter accident in 1977, and the admonition of a family friend, actor Robert Conrad, to be proud of his father “no matter what you might hear,” that set Powers Jr. off on a road of discovery about this man whose past he barely knew.

“In time, I would feel compelled to solve the riddle of Conrad’s cryptic consolation,” he writes, “to learn the haunting truth about my father.” The result is Spy Pilot: Francis Gary Powers, the U-2 Incident, and a Controversial Cold War Legacy. Using personal files, including the senior Powers’ diaries and audio tapes, as well as previously classified documents, Powers Jr. and his co-author, Keith Dunnavant, detail a son’s crusade to restore his father’s good name.

For many Americans, the name Francis Gary Powers doesn’t mean anything, but for students of history, particularly of the Cold War era, it is a touchstone of controversy. Following the end of World War II, and disbanding of the Office of Special Services, the United States found itself in the middle of an intelligence-gathering crisis by the mid-1950s. This came to a head with the “bomber gap”—a fear that the Soviet Union had a significant advantage over the U.S. in the number of Soviet M-4 long-range bombers.

“The possibility that the new weapon could pose risks to the US strategic arsenal created grave concern in certain circles in Washington. How many of these planes did the Soviets have? Where were they based? How would the United States know if it had suddenly fallen behind in the arms race?”

To answer those questions, the CIA, successor entity to the OSS, developed the U-2, an almost glider-like aircraft capable of flying over the Soviet Union at altitudes of more than 70,000 feet and capturing critical photographic intelligence. Because of the altitudes at which it flew, the U-2 operated beyond the range of Soviet missile capability—or so went the conventional wisdom.

That conventional wisdom was shattered on May 1, 1960, when Soviet missiles blew Powers and his U-2 out of the sky at 70,500 feet. Most problematic, though, was Powers’ failure to trigger the self-destruct mechanism on the plane when he bailed out or to utilize the “silver dollar”—a poison pin specially designed as a suicide device. As a result, despite the Eisenhower administration’s public denials of intelligence gathering operations in Soviet airspace, the Soviets had the U-2 wreckage and a bona fide American pilot, alive and well, to prove otherwise.

Critics immediately second-guessed Powers’ actions in the aftermath of the missile strike. Because it was widely believed that missiles were incapable of reaching 70,000 feet, a groundless belief arose that Powers had descended to a lower altitude, presumably to defect, when his U-2 had been struck.

Powers Jr. traces events leading up to, and following, the downing of the U-2, including the Soviet kangaroo court in which Powers apologized for the flight and was sentenced to ten years confinement. When he was released nearly two years later, in exchange for Soviet spy Rudolf Abel—an event that was the subject of the Steven Spielberg film Bridge of Spies—Powers returned to the United States, not as an American hero, but under a lingering cloud of suspicion.

Powers Jr. writes that, for many, “the profound humiliation of hearing him apologize to the Soviets was not something they would soon forget” and those critics believed that “[b]y allowing himself to be captured alive, Francis Gary Powers was a traitor.”

Years after Powers’ death, Powers Jr. set out to rescue his father’s reputation. As a result of his son’s tireless efforts, Powers was posthumously awarded the Silver Star for gallantry by the United States Air Force in 2011, “an admission that Washington had treated Francis Gary Powers unfairly, that it had left a patriot out in the cold for far too long.”

Spy Pilot is a compelling read of the forgotten heroism of a father and the determination of a son to bring that heroism to light. Powers Jr. concludes, “Some minds can never be changed. But I know the truth, and after devoting so much of my life to searching for it, the truth has set me free. Now more than ever, I am a man at peace.”