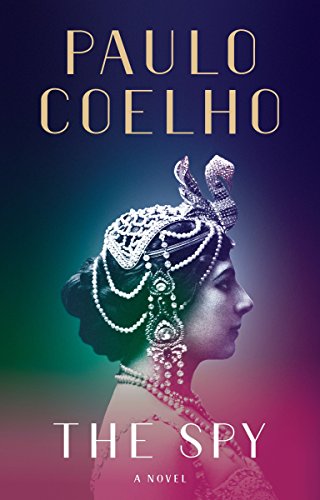 “This is an important book; a finely crafted and well-timed, cautionary tale for a world that seems to be slipping back rather than moving forward in how we view our fellow human beings.”

Based on real events, The Spy is the story of the legendary spy Mata Hari. Set in the early 20th century as World War I begins to loom on the horizon, we meet Margareta Zelle, a beautiful young woman desperate to escape her humdrum life in Holland. After being raped at school by a teacher, she becomes a victim of the local gossips and marries a brutal, alcoholic army officer 20 years her senior as little more than an escape.

They move to Indonesia, then the Dutch East Indies, but the indignities she endured at home follow her. She tries to settle into the life of an army wife and raise her daughter and son. But eventually the suicide of another officer’s desperate wife gives her the courage to break free from her husband and the rigors of a society she despises.

“Love, that inexplicable and dangerous thing, sweeps everything you are from the face of the earth and, in its place, leaves only what your beloved wants you to be.” She is becoming her own woman, reinventing herself with a new name and a new life of her own choosing. She dares to be different.

Mata Hari moves to Paris, arriving penniless and alone. She marvels at the beauty of the place with its Eiffel Tower and “women dressed with an elegance I’d never seen in my life,” while her own country is typified, according to her, by its heavy wooden shoes (clogs) and old windmills.

Within months she has reinvented herself as an artiste, an exotic dancer.  Describing an artist’s mission as “to go beyond one’s limits,” she pushes the boundaries and makes acceptable the unacceptable: stripping. Never formally trained as a dancer, removing her clothes during an exotic dance to reveal a beautiful body seems to do the trick. Mata Hari becomes the toast of the city, as notorious as she is celebrated.

But “the price of a dream is always high.” Bedding the rich and powerful while hobnobbing with great artists like Picasso and Modigliani, eventually sours her popularity. Europe is at war and powerful men seek to cover up their association with a woman who comes to be regarded as a whore, and in today’s jargon a “security risk.” Their “reputations needed to be maintained at any cost. This would only be possible if (she) disappeared forever from France or the world.”

If the outbreak of war is the catalyst, then Mata Hari herself provides much of the ammunition with her dalliances and affairs spanning both sides of the pugilistic nations. Approached to spy for both Germany and France, she is eventually tried in France and found guilty of spying, though she insists she traded nothing but gossip and her body.

In an era yet to move on from the jingoism that had orchestrated the notorious Dreyfus conviction, evidence against Mata Hari is noticeable by its absence. Many years after her death, even the prosecutor described the evidence as “so poor that it wouldn’t have been fit to punish a cat.” Mata Hari is shot by firing squad in October 1917. In her own words, she is guilty of being “a prostitute, yes. A spy, never!”

At first read, The Spy is a difficult book to pigeonhole. It is a work of fiction, yet it provides a highly factual account of Mata Hari’s life using the letters she wrote from her “death row” cell and letters by of the lawyer who failed to save her life.

We begin to understand the confidence—arrogance—of an independent woman whose only crime is to dare to follow her own heart and desires rather than the conventions of the era. It is beautifully told through her own eyes as, facing death, she revisits her short life deciding that “memory is a river, one that always runs backwards.”

For those who question the relevance of revisiting the vaguely familiar history of a woman who died long ago, understand that Coelho’s superb book also works very effectively on another level as an allegorical vehicle. It not only shows us how far we have come in almost exactly one century, but also how far we still have to go.

This is not simply a book about an independent feminist born ahead of her time. It is about how we regard with suspicion and often hostility anyone who is not quite like we are and who chooses to live a different kind of life.  This is an important book; a finely crafted and well-timed, cautionary tale for a world that seems to be slipping back rather than moving forward in how we view our fellow human beings.