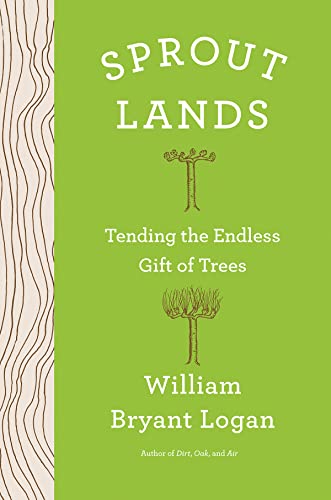 “As the Amazon Rainforest burns and the American West blazes, Sprout Lands demonstrates that simply planting trees will never be enough to mitigate climate change and other human-caused disasters.”

Sprout Lands is a quest through botany and culture to bring back to the present humanity’s long, tangled, and too often forgotten history amid trees.

“The practice of pruning to intentionally cause sprouts was as old as the last Ice Age, and it had been practiced not only in Europe but around the world,” writes arborist and naturalist William Bryant Logan. Rooted in one place, vulnerable to fungi, disease, natural disaster, and predation, leafy trees and shrubs developed a necessary survival adaptation: sprout again, and again, and again, and again.

Noticing this led humans to develop the now millennia-old practice of pruning trees by coppicing (cutting near the base) or pollarding (cutting high along the trunk) to stimulate sprouting, techniques that helped trees live longer while providing humans with fuel and other resources. Whether by ax or controlled fire, these sustainable methods created a reciprocal relationship: humans harvested trees while forests flourished, and biodiversity increased.

Trees may be resilient, but human knowledge is fragile. In much of the world, rapid technological change has resulted in people forgetting once commonly practiced skills in coppicing, pollarding, and other ways of living alongside trees. Lost, too, is the practice of paying close attention to trees, how they live and grow not just in one year, but across the many human generations that a single tree’s lifespan encompasses.

Hired to pollard trees that would front New York City’s Metropolitan Museum of Art, Logan could find no contemporary arborists able to tell him how to safely prune for healthy sprouting. Logan’s question becomes his quest.

And so, Sprout Lands begins its story with a famous willow in New York City and from there travels to England and Spain, Japan, Sierra Leone, and Scandinavia, to name a few places, searching out more than just coppicing and pollarding techniques. What Logan discovers is a partnership whereby humans shaped trees, and trees shaped culture.

From ship building to street laying, poetry writing to basket weaving, fence making to food growing, and much more, trees have long been rooted in human society. Perhaps fittingly, Logan ends his journey at Fresh Kills, an enormous humanmade structure where trees and other flora are slowly reclaiming what had been New York City’s principal landfill.

“To study how trees grow is to admire not only their persistence but their imagination,” and in Sprout Lands, trees create, improvise, learn, and live with such patience and generosity that it seems Logan is preparing an exploration of non-human consciousness. This romantic language may make a science-minded reader pause, but it can also inspire consideration of a joyful future where trees are not merely an economic resource for short-term gain but partners in long-term cultural vitality.

As the Amazon Rainforest burns and the American West blazes, Sprout Lands demonstrates that simply planting trees will never be enough to mitigate climate change and other human-caused disasters. As much as seeds and seedlings, what needs to be planted is a new yet ancient relationship to our trees and forests. Sprout Lands prepares that ground.