Spreadable Media: Creating Value and Meaning in a Networked Culture 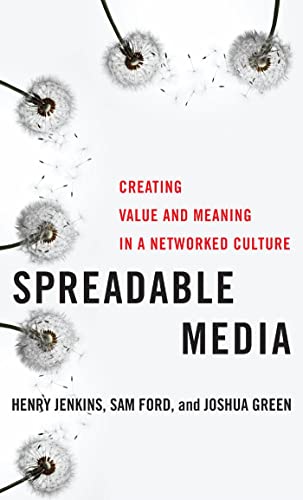 “Spreadable Media does have something to say—if you can accept the term itself and make it past the first few chapters.”

Should you ever find yourself at a cocktail party with Henry Jenkins, Sam Ford, or Joshua Green you are strongly advised to not bring up the words viral marketing. This is because the basic tenant of their new book Spreadable Media: Creating Value and Meaning in a Networked Culture is that what many term viral media is, in fact, more aptly termed spreadable media.

To quote the authors, the “use of ‘spreadable media’ avoids the metaphors of ‘infection’ and ‘contamination,’ which overestimate the power of media companies and underestimate the agency of audiences.”

Put another way, the audience is an active participant in the dissemination of information that we find interesting versus the audience being mere passive carriers of a created message e.g. the virus in viral marketing.

This is not to say that there isn’t any such thing as viral marketing—this still exists in the form of automated responses and mass emails—but according to the authors, videos like kittens playing the piano are more fittingly described as spreadable.

In terms of practicality, the distinction may make a difference in how marketers actually try to achieve that which viral marketing promises, in other words, wildly infectious media. The example that immediately springs to mind is Psy’s Gangnam Style, a video that’s seen over a billion views as of this writing, all of which happened after the authors wrote Spreadable.

But getting back to the book, the concept of spreadable media is merely the latest evolution of how companies interact with their customers. Prior to the 1990s, communication was always one way—from company to consumer. After the 1990s, when companies first put up corporate websites, that communication began to shift to conversation rather than a performance.

At this point, the old “one-to-many” form of corporate communication is essentially dead, and only by taking the next step—past discourse, past true viral marketing—to spreadable media can a company hope to have any semblance of control over the message. Or even have that message be noticed at all.

Unfortunately, just like anything that’s spreadable, the book is a little hard to start—the beginning chapters aren’t the most scintillating—and if you think that the entire concept of spreadable media versus viral marketing is splitting hairs, then Spreadable Media is probably not the book for you to start off the New Year.

Luckily the authors eventually find their footing and supply some interesting case studies to bolster their hypotheses. Spreadable Media does have something to say—if you can accept the term itself and make it past the first few chapters.