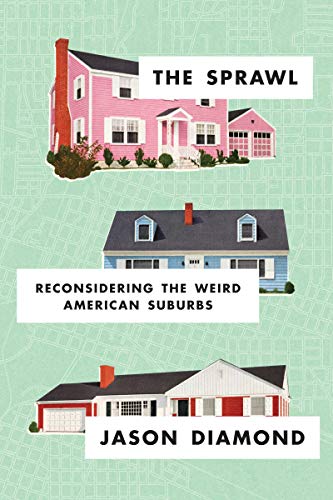 “Engaging and provocative, Diamond’s encyclopedic meditation will certainly help readers—no matter where they live—think about what lies ahead for the outlying areas of our cities.”

“There’s no single way a suburb should be, and there’s no catchall to describe what a suburb is,” writes Jason Diamond, leaving himself plenty of room in The Sprawl: Reconsidering the Weird American Suburbs to consider the stories of a range of outlying areas of cities. He does so with good humor, in often delightful, surprising ways, although he seems conflicted about the ’burbs.

On the one hand, suburbia engenders emotions like “anxiety, boredom, alienation.” In Diamond’s case, he was anxious and alienated growing up in the Chicago suburbs, where he was abused by parents who divorced when he was a child.  They “moved around a lot” for the first 25 years of his life. “I’m used to suburban humdrum and the ennui it can conjure.”

On the other hand, he notes, “Cities are great . . . stuff is happening in cities.” He and others stay in them, for their jobs, for “the culture, the food, the shopping.” “There’s just something kind of cool about a big city.” He adds: “I’ve never heard anybody say that about the suburbs.”

In fact, former suburbanites whose voices we hear in this book recall their sprawling neighborhoods as decidedly uncool. Asked what she loved about growing up in suburban Michigan, Madonna replied, “Oh, nothing.” Science fiction author William Gibson says his early years in suburban Charlotte, N.C., were “like living on Mars—no grass and lots of orange clay.”

Diamond spent two years reading the literature of suburbia. He says John Cheever, poet laureate of New York City’s suburbs, was one of many fiction writers in the 1950s and ’60s (others were John Updike and Richard Yates) who deemed the ’burbs “a fake place full of fake and sad people.” In films like Blue Velvet, David Lynch and others exposed “the dark side” of the suburbs.

Diamond is lavish in his praise of “books and records and movies” that suburbs have given us. Only gradually do we realize that he is celebrating not suburbia but rather the work of gifted creators who have mined the banality of ex-urban places they disliked to reveal how some people live there.

In essay-like chapters, Diamond traces the rise of suburbs, their role in American life and culture, and his personal experiences of the places where more than half of us now live.

His stories of the first, early 19th century suburbs reveal a widespread American impulse to get closer to heaven. In Zion, Illinois, Scottish faith healer John Alexander Dowie created a utopia, one free of crime, gambling, theater, circuses, and the sale of alcohol and tobacco. It became a company town built around his evangelical church. In Llewellyn Park, NJ, pharmaceutical manufacturer Llewellyn Solomon Haskell established a 400-acre gated suburb offering country homes for the wealthy. Hidden behind acres of trees were residents from Thomas Edison to Whoopie Goldberg.

Both early suburbs sought “spiritual enlightenment through good landscaping,” writes Diamond, as well as “the hope of finding something—what modern suburbia is still all about.”

By the mid-20th century, racial restrictions in Levittown and elsewhere had made the suburbs “almost exclusively for whites,” fostering the disillusionment of intellectuals like Lewis Mumford and Jane Jacobs. Diamond tells the stories of places like Lake Forest, Illinois, where “gentlemen’s agreements” kept blacks, Jews, and immigrants from owning land.

More recently, the 1999 Columbine school shooting forced many to rethink the matter of who should live in suburbia, says the author. The issue “wasn’t about keeping people out; rather it was knowing who was already in.”

“Despite everything, I believe in the suburbs,” writes Diamond. There’s still an opportunity to “start reworking suburbia, moving these places closer to the original idea of humans living a more harmonious existence and further away from the sprawl of the post-Levittown era.” And: “The truth is that I see beauty and even good through all the ugliness and sprawl.”

His idealized view of what suburbs might be stems from fondly recalled early childhood years in Skokie, Illinois. Then and now, it has “people from all over.” There were “black neighbors and Greek neighbors” on his street. “Skokie is what I love about America and what I’d love to see more of. It’s not perfect, but people there are out walking, talking to strangers . . . and its population comes from all over the world.”

Diamond lives in such a place today—in New York City, in a highly diverse section of Brooklyn, where he steers the literary web site Vol. 1 Brooklyn and writes for The Paris Review and other publications. “I’ve made my home in a city,” he writes. He never says so, but Diamond seems to imagine the American suburbs of the future will become more like today’s Brooklyn.

And why not? Always changing, suburbs are certainly increasingly diverse, with many new immigrants settling directly there. And their stories of suburban life are being captured by writers from different ethnic backgrounds, like Celeste Ng (Little Fires Everywhere), the child of parents from Hong Kong, and Rakesh Satyal (No One Can Pronounce My Name), who writes about Indian immigrants outside Cleveland.

Engaging and provocative, Diamond’s encyclopedic meditation will certainly help readers—no matter where they live—think about what lies ahead for the outlying areas of our cities.