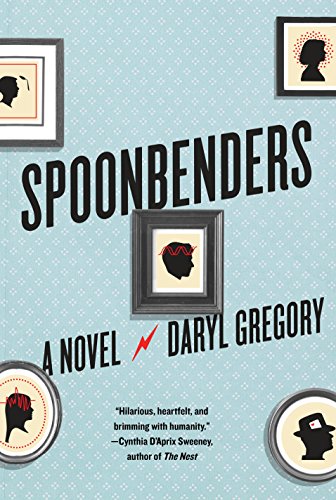 Spoonbenders is a ripe peach. Something you yearn for. Something you have to wait a long time for; something that, when you get your hands on it and tear in, proves to be just as sweet and juicy as you’d hoped.

Spoonbenders, the new novel by Daryl Gregory, who, heretofore, has authored novels like Afterparty and We Are All Completely Fine, and an excellent short story collection called Unpossible, begins with great promise:

“Matty Telemachus left his body for the first time in the summer of 1995, when he was fourteen years old. Or maybe it’s more accurate to say that his body expelled him, sending his consciousness flying on a geyser of lust and shame.”

In other words, he was doing what most teenaged boys tend to do, but getting results that most don’t. He has a gift for astral projection that Doctor Strange would envy.

Matty is third generation Telemachus, the son of Irene, who herself is the daughter of Teddy Telemachus and a sort of a human lie detector to boot.

As our author explains his cast of Telemachuses, beginning with Irene:

“[Matty] knew that she couldn’t be lied to, just as he knew that Grandpa Teddy read the contents of sealed envelopes, that Grandma Mo could see distant objects, and Uncle Frankie could move things with his mind, and that Uncle Buddy, when he was small, could predict the scores of Cubs games. That they were psychic was another Telemachus Family Fact, in the same category as being half Greek and half Irish, Cubs fans and White Sox haters, and Catholic.”

Together, they are Teddy Telemachus and His Amazing Family, an act that in the once-upon-a-time of the 1970s, got to be popular enough to end up demonstrating their skill on the Mike Douglas Show, where everything was wowser until professional skeptic and stage magician R. Randall Archibald is sprung upon them and they end up debunked on live TV.

Things go downhill from there. Especially for Frankie, who makes up his mind to raise a fortune at a casino by controlling the slot into which the roulette ball falls. It proves to be a bad idea, as do nearly all the ideas that the various Telemachus parents, children, siblings, and cousins tend to attempt.

All through Spoonbenders’ Tilt-a-Whirl of a plot, machinations, schemes, and plans are unveiled, or remain hidden, sometimes succeed and sometimes fail, relationships are born and relationships (and characters) die, and stakes are high and building toward Labor Day Weekend—or, more specifically, to September 4, 1995, 10:06 p.m.—at a pleasingly rapid pace. All of which is completely entertaining, because Spoonbenders is the summer read that we have been waiting for, a nice fat hardback that, like a faithful collie, can accompany you everywhere.

Because, like all those powders and poultices from CoverGirl, it’s all so breezy, bright, and beautiful.

And, better, because it’s the mid-’90s, things make much more sense than they presently do: the Russians (and there are lots of Russians—Russian psychics galore—from way back when we were pretty sure they were the bad guys) are our enemies and intelligence agents our friends.

And the mob (also much involved in the plot—the Amazing Telemachus Family lives in Chicago, so what do you expect?), well, they are smashing hands and taking houses if you fall behind in your payments, so, again, things seem normal, even given the spoonbending—all of which seems incredibly comforting in the summer of 2017, when. let’s face it, all bets are pretty much off.

So the question is not, given how funny the book is, how genuinely sweet and humane, and how great the characters are, and how well written the whole thing is (more on that in a moment) or how the whole thing plunges ahead, taking its reader with it, whether Spoonbenders will be made into a movie—it will, it must—but whether or not Michelle Pfeiffer will play the part of Graciela, the mob wife, or whether, at this stage of her career, she feels that she has played enough mob wives for the time being. And then there’s Robert De Niro, who appears to have had the part of Teddy Telemachus written for him.

As to Spoonbenders, in the end, everything turns out fine, because this is a novel of the old sort, one that is not oblique. One that not only ends, but The Ends, with everything resolved and with the medal for being The World’s Most Powerful Psychic being given to the person to whom it should be given.

But forget all that. Forget the John Irving-worthy plot. Forget the robust cast of characters. Forget even that the whole shebang opens up with a quote from that original spoonbender himself, Uri Geller (“You’d think that whatever cause these things to happen doesn’t want them to be proved.”). What makes Spoonbenders sing is the writing itself.

Daryl Gregory is a splendid writer. One who can flesh out a character like young Matty like this:

“It was true that he was unusually nostalgic for a kid, though what he pined for was a time before he was born. He was haunted by the feeling that he’d missed the big show. The circus had packed up and left town, and he’d shown up to find nothing but a field of trampled grass. But other times, especially when Mom was feeling good, he’d be suddenly filled with confidence, like the prince of a deposed royal family certain of his claim to the throne. He’d think, Once we were Amazing.

“Then his mother would lose another job, and they’d have to eat Kraft macaroni and cheese for weeks straight, and he’d think, Once, we were Amazing.”

Or this brief, beautiful description:

“Outside it was gray on gray, snowflakes hovering in the air, the world rendered as a pencil sketch.”

Or this brief bit of dialogue that’s not only funny, but also gets the time frame just right:

“He stepped onto the porch and nearly slipped on the tile, now slick with condensation. The night air, it turned out, was a moist and thick as swamp gas. ‘Jesus, this humidity,’ he said. ‘It’s . . . what’s the word? Cloying.’

Or this bit, perhaps the Best in Show:

“He glanced toward the restrooms to make sure Graciella wasn’t on her way back. ‘It’s not about screwing and banging—where did you get such a filthy mouth? It’s not about sex. I haven’t used my dick in so long I wouldn’t know where to find it. I sent it out for a pack of Camels in 1979 and it never came back.’”

There may be those who disagree, but a good dick joke is a joy forever. And this is a great dick joke.

The point is that, right here, right now, it may be the Golden Age of Television (again, Elizabeth Moss in that wimple), but it’s been a long and lonely time if all you’ve wanted, like me, is a well-written, entertaining novel. Something about which the term binging means reading faster, longer.

Having grabbed onto Spoonbenders, I am recharged, satiated. While searching for a snack, I happened upon a buffet. And can now return to those things that are purposely oblique, plotless, and/or self-important. Which is to say, all those books with author’s photographs of the haunted sort.