Spoils of the Dead (5) (Liam Campbell) 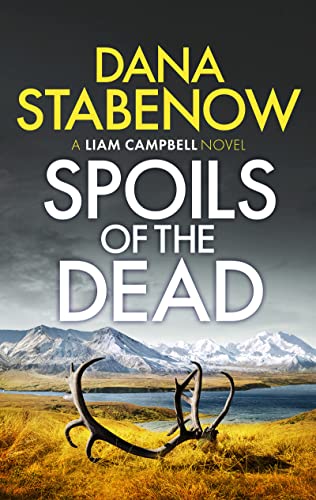 Welcome back Liam Campbell, Alaska State Trooper. This fifth book of his adventures comes as the first since 2002. During the long hiatus, the author was busy building up a parallel series about Kate Shugak, a private investigator operating elsewhere in Alaska. She and Liam are contemporaries, though, and intersect at one point in the Shugak series (Restless in the Grave, 2012).

In this new Liam volume there’s a cross reference to their acquaintance, but otherwise it’s his story all the way. He’s enjoying a fresh start—new posting, new wife, new prosperity, new horizons—after years doing penance after a disastrous setback. But before he’s been in town for a week and officially on duty, he’s thrust into the middle of two murder cases.

One is new: an archeologist working evidence of ancient Native presence in a coastal cave that will affect future oil drilling and development in Liam’s corner of Cook Inlet. The other is old: a body discovered in the archeologist’s cave, which proves to be a boy from recent decades. Liam must learn whether these killings are related, and if so, how, and of course whodunit.

He barely knows any of the players. Unlike in remote Newenham, where he spent the first four volumes of his story, coastal Blewestown is not just new turf but culturally opposite. Alaska, like everywhere else but in higher relief, is populated by pockets of different groups abrasively coexisting. Blewestown is mostly white versus Native and prosperous versus precarious or impoverished. The town itself began to flourish after its competing community was wiped out in the 1964 tsunami.

Among the suspects Liam has to sort through are a movie star who has moved to town for privacy; a seductress who works for the oil company and had an affair with the victim; an old codger with whom the victim was in perpetual professional conflict; the codger’s crony, the oldest living native of the community; plus assorted curmudgeons and scoundrels, all of whom provide red herrings.

Meanwhile, Liam and his wife, Wy Chouinard, must sort out their own affairs. She had to give up her successful aviation business to follow him, and now must restart her own life and career. Their relationship was developed in previous volumes in the series, but it holds its own in this book without the backstory. Alternating chapters in their points of view present their differing courses coming together, so that she ends up helping him solve the case.

Unlike many other crime-series heroes, Liam is passionately in love with his wife and she reciprocates. Their mutual lust and love make this book refreshing, especially since they find ways to support each other. An irony is that she’s a bush pilot, and he’s terrified of flying. Given that a lot of getting around in Alaska is only possible by air, this is a significant issue to manage.

The author, Alaska born, brings authenticity to her stories. She also has a crackling, sometimes snarky, writing style that pulls readers in and adds moments of both levity and gravitas to her tales. The Liam Campbell series is generally lighter in tone than the Kate Shugak series but it never ignores the hard core of Alaskan reality. Readers from “Outside” can’t avoid learning about the climate, the cultures, and the economic realities of the 49th, and largest, U.S. state.

Kudos to the author for making the environment as much a part of the story as its characters. They are inextricably intertwined. And a caveat to readers of any Dana Stabenow novel: One can never be sure what the ending will be.

To mention it here would be a spoiler, so you’ll have to read the book to find out. It’s a mystery novel, after all. Chances are good you won’t be disappointed, and will join the ranks of Liam Campbell fans waiting for the next installment and hoping it won’t take another nine years.