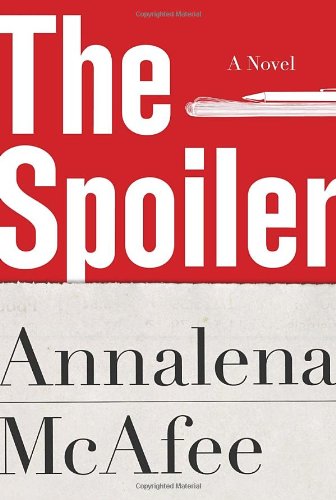 “The plot of The Spoiler rattles along with slow-burning subplots that manage to keep the reader engaged. If the reveals are a little disappointing in their substance, Ms. McAfee makes up for this with her witty execution. When the story—and Sim’s—concludes, the reader is indeed left with a strong flavor of what really goes on in the business of newspaper journalism—and it isn’t a very nice taste.”

A novel by a journalist about journalists promises to be revealing, shocking, and funny. Ms McAfee’s novel The Spoiler brings all of these elements into play, particularly the humor.

But reading this book during the week that the world learned of the terrible loss of journalist Marie Colvin brings another emotion to the fore: tragedy; not just the tragic loss of a talented, dedicated woman, but also the demise of news gatherers of Ms Colvin’s caliber—something The Spoiler illustrates in bucket loads.

Set in the late 1990s, when the Internet was considered a mere fad, The Spoiler is a story of two London-based journalists who span the spectrum of age, ability and integrity.

Pulitzer Prize-winner Honor Tait, now in her eighties, is reflecting on a life spent in war hellholes around the world. Pointedly, she was renowned as the “Dietrich of the newsroom” for her stunning looks, reminding us that summing up a woman’s talents has always been lynch-pinned by her appearance. Reduced, as she sees it, to giving interviews to publicize her new book, Tait comes into contact with Tamara Sim, a Thesaurus-clutching writer serving the celebrity-obsessed press with stories like “The Pits—Underarm Hair Horror of the Stars” or those catchy A-list lists such as “Top Ten Soap Star Love Rats.”

Ambitious Sim sees the formidable Tait as a stepping-stone to bigger and better things, and stumbles through the book in search of a gossipy story from her interviewee. Caught up in the fame-driven bubble, Sim adds two and two together and makes five, and the old adage “publish and be damned” could rarely have been more effectively and heartbreakingly applied.

Ms. McAfee sets out her stall engagingly, opening her story with insight into the worlds of these two characters, but while we understand and admire Tait, we never really get beyond the veneer of Sim; and this is the main downfall of The Spoiler: The reader does not empathize with this key character.

Screenwriters are aware of the need for a “stroke the cat” scene: that moment when even a ruthless antihero is shown to have a loveable side—think of Tony Soprano’s ducks. The need is no less great in a novel. Ms. McAfee attempts this twice: using Sim’s brother, Ross, whom she tries to claw back from a ghastly world of drugs and doomed relationships; and introducing a small table that she cherishes and decorates with her late mother’s mementos including “a silk scarf she had used to cover her thinning hair during chemotherapy.”

Unfortunately, any poignancy is lost as Ross becomes a simple plot device, and Ms. McAfee describes the collection of mementos as a “reliquary” (rel-i-quar-y n. a container for holy relics mid 16th cent: from French reliquaire).

Once again the reader reaches for the Kindle “Definition” button or the dictionary, breaking the magical potential of the moment. The author’s use of unfamiliar, unusual words begins as a clever device: Honor Tait’s command of the English language is sublime, while Tamara Sim’s comes from an often inappropriate romp through her ever-present thesaurus.

But Ms. McAfee seems to fall into the trap herself, frequently opting for words of several syllables when one would do. That page-swipe function on the Kindle came in handy when The Spoiler indulged in its verbiage to the detriment of drama, character development, and pacing.

The plot of The Spoiler rattles along with slow-burning subplots that manage to keep the reader engaged. If the reveals are a little disappointing in their substance, Ms. McAfee makes up for this with her witty execution. When the story—and Sim’s—concludes, the reader is indeed left with a strong flavor of what really goes on in the business of newspaper journalism—and it isn’t a very nice taste.