Spite: The Upside of Your Dark Side 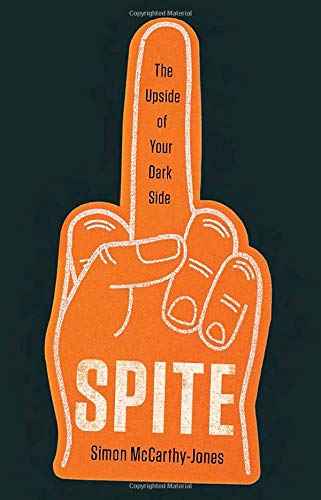 “The chapters on spite and freedom, politics and what is sacred to us are an insightful, relevant, and welcome commentary on what to make of our current hate-filled political climate.”

According to Simon McCarthy-Jones, spite gets an undeserved bad rap. While the term is usually defined in its “weak” form as harming someone while risking harm to yourself, he uses its “strong” definition: to harm someone and do harm to yourself in the process. This idea at first sounds wildly illogical, but the book presents enough well-reasoned arguments, backed by a plethora of research, to convince us otherwise. And, fortunately, the author’s humorous observations and his way with words keep the book moving along.

Most of us are justifiably terrified of spite when we are on the receiving end of it and when we catch a glimpse of it within ourselves because we recognize its unfettered power. It is an explosive emotion that can do great damage to individuals, groups, countries, and the world. Think of Hitler, Captain Ahab in Moby Dick, Al Qaeda, and recent political clashes that are fueled by hate and targeted at nothing less than a total take-down.

Examples abound of spite rearing its ugly head: in business, sports, love, divorce, politics and even suicide, when people take their own lives in order to hurt others. We see it on the highway in road rage and in petty, everyday occurrences in which people put themselves at risk in order to one up someone else. It occurs when our “last-place” aversion causes us to cheat though we might get caught or lose what little we have simply to wipe out all that a rival has.

McCarthy-Jones draws many of his conclusions from research studies in diverse settings and cultures based on what is called the Ultimate Game. This “game” involves participants’ reactions when lowball money offers are made and then either accepted or rejected. The upshot of these “games” is that participants often act and react in ways that do not maximize their material self-interest, but instead exhibit spite.

The author argues that a positive way we use spite is as a counter-dominant strategy to maintain civil, productive societies. These spiteful actions are meant to convince group members that cooperation and egalitarianism serve the community far better than the dominating impulses they might engage in. Counter-dominant spite has a goal of preserving the status quo: do that again and you’ll be drummed out of the group—or worse.

Dominant spite, on the other hand, is all about competition and the desire to punish and inflict pain on others who threaten our status or gains. We may pretend it falls under the guise of keeping the herd together, but its true aim is to keep or achieve power for its own sake. Born of anger on our or others’ behalf, dominant spite is less about righting a wrong than about forcing wrong-doers to pay a steep price for their transgressions.

Not surprisingly, spite shows up most often in the “dark triad of personality traits of psychopathy, narcissism, and Machiavellianism.” Moreover, spite is more common when inhibitions are low, such as when drinking alcohol, and when self-control has ebbed away. A person’s level of serotonin and the amount of testosterone in males may also influence the urge to act or refrain from acting vindictively.

Who are the least spiteful people? Those who meditate, because keeping angry feelings at bay prevents taking action on them. Those with high “cognitive reflection” which favors rational thought over gut reactions. And those who are able to discern when spite is necessary or when forgiveness might be a more benevolent, beneficial option.

The book is not simply a theoretical discussion on the evolution and function of spite. It is a contemplation on human nature and why we do what we do to each other, for better or worse. The chapters on spite and freedom, politics and what is sacred to us are an insightful, relevant and welcome commentary on what to make of our current hate-filled political climate. We learn why, while spite eats away at the fabric of civil discourse, due to the Internet’s anonymity factor, it also has become a deadly weapon on the battleground of social media.

The book explains that we use spite to get what we want based on what is most sacred to us and that individuals may differ greatly on what that is. While to some, building a society that does what is beneficial based on reason is of utmost importance, for others having choice is more crucial than what we do with it. McCarthy-Jones calls this type of acting against our rational best interest—whether its railing against reason or against the inevitable constraints of life—“existential spite.” He quotes Fyodor Dostoyevsky to make his point: “What has made them conceive that man must want a rationally advantageous choice? What man wants is simply independent choice, whatever that independence may cost and wherever it may lead.”

The book lays out how social dominance theory triggers spite and how spiteful actions in defense of sacred issues can devolve into grievances or blossom into just causes. We learn the positive or negative impact that moral outrage has in generating spite and how it can be channeled into pro- rather than anti-social behaviors and movements. And we come to see how spite can be used as a powerful force for good: to prompt us to create, excel, cooperate and prevent injustice.

The key to societal and human well-being is to use spite consciously for the collective good, to release “spite when reason tells us we need to,” to live in healthy balance between spiting and forgiving, and to be honest about our own motivations to hurt others. A tall order, but then, most human endeavors that involve emotions are.