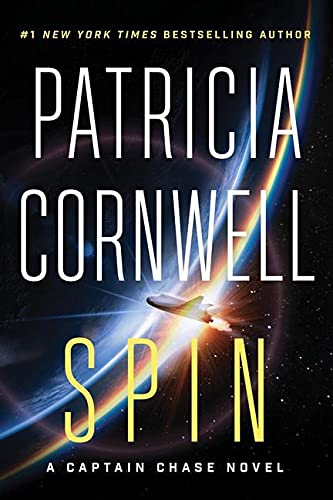 Spin is an appropriate name for this techno-thriller because it can make your head spin. There is so much going on at the same time, coming from so many different directions, involving so many characters, and so much tech-talk, that readers need strong multiprocessing skills to assimilate and follow it for 400 pages.

The editor helps non-techy readers by inserting little courtesies like defining the myriad acronyms and translating metric measurements into US Customary. But for readers sensitive to writing style, the way dialogue is often punctuated to create run-on sentences will drive them cuckoo.

“I know what he is,” her eyes are constantly moving.

“Well, she certainly gets away with it if she can hang everything around your neck, right?” baiting him, I keep an eye on the black Suburban . . .

When not being distracting, the story gallops along at top speed from the hazardous start to the rushed climax. It features Captain Calli Chase, a member of the U.S. Secret Service Electronic Crimes Task Force, who is called upon to help investigate a crucial rocket crash suspected to be sabotage.

Calli and her colleagues across jurisdictions have long been fighting an archenemy embedded in the highest echelons of government, who operates in plain sight, untouchable. They believe her to be masterminding a plan to take over the country, possibly the world, through hijacked cyber technology. This evil woman and her minions must be stopped at all costs.

Calli turns out to be the ultimate weapon.

She’s partnered with her twin sister, Carme, currently operating under cover to both help foil the villain's plan and keep herself alive. Carme and Calli are prodigy children of career scientific geniuses working for the government on secret plans. They have groomed the twins since birth to become key players in the next generation of warfare, already in process in space.

Calli soon learns that her role includes being transformed into a bionic woman. The first chunk of the book covers her physical and psychological transition, and is perhaps the most interesting aspect of the story. Carme is six months ahead of her in becoming a prototype for a new class of warrior. They are not allowed to be seen together, and often have to pretend they are the other, as part of the smoke screen surrounding their missions.

Their actions range from basic police procedure to piloting military aircraft, in settings ranging from the family homestead to NASA facilities—and in Calli’s case, even the Situation Room at the White House. She’s the only one who can fly a prototype spacecraft designed to integrate with her prototype bionics. The combo is needed to stop an enemy-controlled spacecraft that threatens the future of humanity on Earth.

Since this is a thriller, the story’s time period is short with the clock relentlessly ticking. Lots of people get taken out and evidence covered up. Many ingenious devices are introduced to give the antagonists back-and-forth advantage over each other. Often the scenario feels like an updated James Bond adventure.

Updated to what period remains unspecified. It can be interpreted as today or the near future. Among all the name-dropping for places and organizations, there’s a careful avoidance of name-dropping for people. This allows the story to feel contemporary and plausible while avoiding association with any actual political intrigue.

The narrative is written in Calli’s voice, in present tense, so readers are right there with her as things happen. While she is often abrasive, she’s also compassionate, and unlike her sister she’s got a self-preservation gene. “If I’ve learned nothing else,” Calli says, “it’s never to rest on your laurels or get too comfortable. About the time you do, you lose an engine in your aircraft, someone pulls out a gun or steals your invention.”

Her job is to be ahead of such disasters at all times, and it’s why she makes it to the end. That is, the end of this volume.

Spin is actually Book 2 in a series, unadvertised as such in its hardcover packaging. The only hint is the subtitle: A Captain Chase Novel. (If purchased online, however, the sell page clearly indicates Book 2. If purchased after browsing in a bookstore, a clue can be found in the list of author’s other titles. But how many people read front matter when deciding to buy? Most sample the opening chapter, and look at the covers and blurb.) Thus, buyer beware. The subtitle suggests the start of a series, or else a full standalone with an established character.

It’s normal for series fiction to have an overarching conflict that connects the volumes and isn’t resolved until series-end (if at all, because sometimes series just fade away rather than running through an intended number of volumes). In the meantime, each book tells its own tale, which may or may not depend on its sequential position in the series or even feature the same character.

While Spin can be read as a standalone, it appears to be a running story. It would help readers to know a whole book of setup precedes it, explaining why this book opens in the middle of an action scene that feels like it started a few pages ago but the pages are missing from the binding. It might also explain why the story ends on a cliff-hanger.

Cliff-hangers are okay for readers who have bought in to a premise and intend to read the next installment as soon as it’s published. Cliff-hangers are not okay for readers who are trying a book out. They get cheated of resolution after their investment of time, attention, and money. The author ultimately gets cheated, too, from losing a potential fan who will buy more of their books and spread positive word-of-mouth.

Spin cuts its ending too close to the cliff. Calli’s incredible achievements after a long, dangerous struggle are brushed aside to make room for a blatant teaser for the continuing saga. That leaves a sour aftertaste of marketing manipulation instead of satisfaction from a good story that leaves readers eager for more.