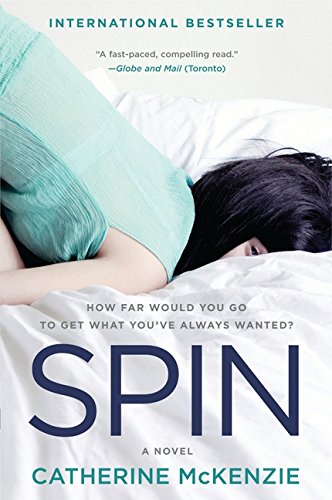 “For readers who enjoy a light, breezy love story, this book clips along well and satisfies. For those who prefer to go a little deeper into some questions that gnaw at the human condition, the book doesn’t do enough. Many will likely find this book enjoyable and a worthy debut effort by Catherine McKenzie.”

Party girl and music lover Kate Stanford comes closer than most to achieving her lifelong dream when she secures an interview at her favorite music magazine, The Line. The interview has the potential to be even more special because it is slated for her 31st birthday. But when a friend invites her out (just for one) to celebrate the eve of her birthday, Kate downs a few too many—leading to a disaster the next morning.

Catherine McKenzie, in her debut novel, ably invites the reader into the story. Just when Kate believes she has blown her opportunity, she gets a call to go on an undercover assignment for the company’s sister publication, Gossip Central, a celebrity rag. Her task is to enter the same rehab facility as pop-phenom Amber Sheppard, “The Girl Next Door,” (TGND) and produce an exclusive story that could lead to permanent employment at The Line. The opportunity for a juicy expose gets even better when TGND’s equally dysfunctional boyfriend and James Bond portrayer, Connor Parks, enters the exact same facility.

Things get complicated fast. Does Kate herself actually need rehab? When Amber befriends her, can she go through with the story? Is there a more meaningful existence than suspending living the life of a perpetual a college student? Can Kate get comfortable enough with herself that she can form a meaningful relationship with another?

In rehab Kate falls for Connor’s bodyguard, Henry. Their unlikely convergence and subsequent relationship/non-relationship/relationship form the basis for most of the second half of the book.

This is where the story either takes off or gets a bit derailed, depending on your perspective. Ms. McKenzie misses an opportunity to truly delve into the pathos of the media entertainment industry and the addiction to celebrity of so many seemingly normal people. The moral quandary of whether or not Kate should write the story comes into play in the latter fourth of the novel, but serves more as a mechanism to wrap up the story than a theme to be explored.

The author could have opted to delve deeper into Kate’s behavior, background, and possible addiction, but her family and past are dealt with in such a cursory manner that the book wouldn’t have suffered if references to family were omitted. This oversight makes any transformation in Kate at the end of the story less credible. The music reference reveal Kate’s interests and help establish some measure of time and place but don’t do much to advance the story or reveal much about Kate or the other characters.

This leaves the love story, which, by process of elimination, appears to be the primary crux of the story. Can Kate find true love? The book leaves just enough loose ends to satisfy, yet still leave us wondering.

For readers who enjoy a light, breezy love story, this book clips along well and satisfies. For those who prefer to go a little deeper into some questions that gnaw at the human condition, the book doesn’t do enough. Many will likely find this book enjoyable and a worthy debut effort by Catherine McKenzie.