The Spies of Shilling Lane: A Novel 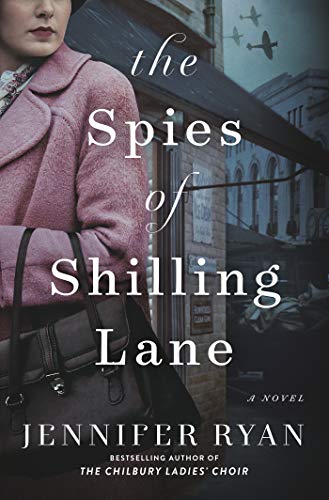 Jennifer Ryan’s latest novel opens in Ashcome Village, England, in March 1941. A disgruntled Mrs. Brathwaite wonders how a person measures the success of their life. Her guiding principles have been “Social standing. Reputation. How the world sees you.” Her Aunt Augusta had trained her that she was of superior standing compared to other people. This thread meanders through the novel as the middle-aged Brathwaite faces the harm she has done not only by emotionally neglecting her daughter Betty, but also by lacking consideration for her fellow WVS volunteers, as evidenced by her recent demotion from the group’s leadership.

Her husband has left her for another woman, and the village is shunning her, so she realizes she must find her daughter and tell her everything. She leaves for London, armed with the knowledge that Betty lives in a boardinghouse, has a busy clerical job, and is keeping herself safe despite the bombs the Germans are leveling on London.

At Betty’s lodgings, she meets the bumbling Mr. Norris, the landlord. Mrs. Brathwaite moves into Betty’s room and notes that there is little evidence of her presence—few personal effects. Her mother worries that Betty could have been hit by a bomb and been killed in the Blitz. Indeed, Mr. Norris tells her the bombers have come over the city for the first 56 days and nights, and tells her of rations and food shortages.

From Florrie, one of the boarders, she learns that Betty has been seeing a fellow but that she was going away to a place called Sevenoaks. Determined to figure out where her daughter is, she is fraught by memories of their estrangement over the years as Betty has grown. She is regretting the chilly goodbye she gave her when she left home for London. She locates a bombing victim named B. Brathwaite at a London hospital.

The girl’s burn wounds are extensive and such that Betty finds it nigh on impossible to figure out if that is her daughter. Yet she sees from the nose and mouth that this girl is not her daughter. She learns from the nurse of the courageous acts of this burn patient: that she saved 11 children from the fire in a bombed-out school and was found under a collapsed roof. It is at the moment when Betty holds the patient’s hand and envisions the memory of holding her own daughter’s hand as a child that she begins to learn the meaning of love. She later discovers her own daughter’s whereabouts in the clutches of a spy ring and must fight against all odds to rescue her or risk dying in the attempt.

At first reading, this novel plodded rather than flowed. The introduction lagged with so much time spent on Mrs. Brathwaite’s flaws that the reader found her unpleasant and hardly worth rooting for. On second reading, the theme of the novel presented more clearly—that Mrs. Brathwaite’s redemption lay in her own self-forgiveness and redemption.

Yet the encounter that Mrs. Brathwaite had with the burn patient did not make sense in the context of the whole novel, and the repeated encounters with the spy ring and rescue attempts appeared to rehash rather than advance the plot. One likeable feature of the novel, however, was the self-reflection of Mrs. Brathwaite in her recognition that motherhood is more than raising a child—it also entails establishing and maintaining a lifelong bond of mututal trust and support. A reader willing to look for that thread will not be disappointed.