Spies and Traitors: Kim Philby, James Angleton and the Friendship and Betrayal that Would Shape MI6, the CIA and the Cold War 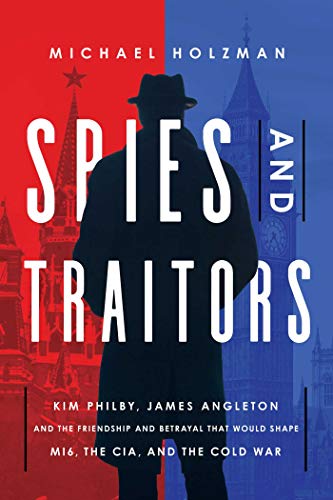 The Cold War was waged overtly by political leaders, armies, diplomats, and covertly by intelligence services—most prominently America’s CIA, Britain’s MI6, and the Soviet KGB (previously called the NKVD) and GRU (military intelligence). The interesting subjects of Michael Holzman’s fascinating new dual biography—H.A.R. “Kim” Philby and James Jesus Angleton—were two key players in the covert side of the Cold War. Angleton was the spy and Philby the traitor of the book’s title.

Philby was one of the infamous “Cambridge Five” spies who for ideological reasons betrayed their country and the West by working for the Soviet Union. Angleton worked for the American OSS (the precursor of the CIA) during World War II, and later was the CIA’s chief of counterintelligence until 1974. They worked closely together in London during the early years of the Cold War, until it became increasingly evident that Philby was working for Moscow and had betrayed secret Anglo-American covert operations to the West’s Cold War enemy.

One of the covert schemes that Philby betrayed was Operation Rollback, a plan to insert agents and saboteurs into Soviet satellite countries in Eastern Europe with the goal of inciting revolutions within the Soviet bloc. In March 1951, Philby informed the KGB that Western-supported agents would be sent to Albania, the Baltic states and Ukraine, which resulted in the agents’ capture and execution. Holzman believes that Philby’s betrayal ruined the West’s opportunity to undermine Soviet rule in Eastern Europe at that time.

Philby also provided the names of Western intelligence agents and their methods to his Soviet masters. For this traitorous work, Philby received the Order of Lenin and other communist awards, as well as comfortable living arrangements in the USSR. Philby continued to train Soviet and Eastern bloc agents to work against the West until his death in 1988.

Philby’s betrayal also affected Angleton who when he became CIA chief of counterintelligence was determined to prevent a similar disastrous enemy penetration of the CIA. And according to Holzman, Angleton succeeded.

And Angleton’s success was due to his “chronic skepticism” about alleged Soviet and Eastern bloc defectors. Under Angleton’s direction, CIA counterintelligence had to verify the “bona fides” of every alleged defector, and Angleton presumed that every defector was a double agent. Holzman, unlike Angleton’s legion of critics, concludes that Angleton took the correct approach.

Angleton was also familiar with previous successful Soviet infiltration and “false flag” operations, including Soviet penetration of the wartime Manhattan Project, the Roosevelt administration, and the media. The VENONA (Army signals intelligence) intercepts of communications between Moscow and its American agents, Holzman explains, informed Angleton that “the Soviets had placed over 200 agents and sources inside the U.S. Government.”

Holzman writes that Angleton defended the CIA against Soviet penetration “through a continuous investigation of everyone within the CIA who might be in a position to be seriously damaging if they were indeed a foreign agent.” In the 1960s, Angleton’s hunt for a “mole” within the CIA centered on the dual defections of Anatoliy Golitsyn and Yuri Nosenko.

Golitsyn convinced Angleton that the CIA had been penetrated and that Nosenko was a false defector sent by the KGB to discredit Golitsyn and to convince the CIA that the Soviets were not involved in the assassination of President John F. Kennedy. Angleton pursued this “mole” hunt and in the process upended careers and caused turmoil throughout the CIA’s Soviet Bloc Division.

Holzman points to KGB archival evidence, however, that supports Angleton’s fears. In one report from KGB director Andropov to Soviet leader Brezhnev it is noted that in 1967 the KGB recruited 64 agents who possessed “operational capacities for work against the USA,” including 31 agents planted in “the enemy’s intelligence.”

Angleton died in 1987. Angleton’s detractors often portray him as conducting a “witch hunt” within the CIA in the 1960s comparable to the “McCarthyism” of the 1950s. But although McCarthy was often imprecise and reckless with some of his accusations, history shows that he underestimated the extent of Soviet infiltration of the US government. And Angleton’s search for communist moles within CIA, Holzman shows, “was not baseless.”

Intelligence can be a dirty business. Holzman quotes a dying Angleton telling a friend that, “We played with lives as if we owned them . . . [and] the founding fathers of U.S. intelligence were liars . . . [who had] a desire for absolute power. . . . But I was part of it and loved being in it. . . . I guess I will see them [in hell] soon.” And he likely thought that Kim Philby would be there, too.