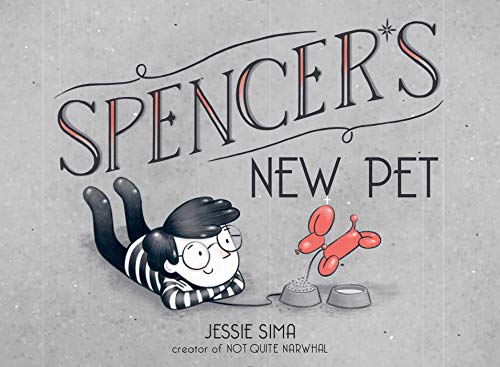 A classic with a twist, Spencer’s New Pet is just that in both its authoring and its illustrating. Jessie Sima’s creativity graces the reader with a fun and effective style that perfectly matches a fun and unexpected story.

Spencer, known only by the title of this wordless book, which is wonderfully free of any tacky, cliché or forced dialogue, unfolds into action after a 3 . . . 2 . . . 1 . . . countdown rendered in silent movie fashion, launching us into Part I: The Pet. Somehow the artwork delivers a palpable sensation of the gritty visuals, and mimics the crackle effects of the projector familiar to this earliest form of cinematic, moving-picture entertainment.

With Part I: The Pet, we are introduced to the only color in this otherwise black, white, and gray-scaled palette: a shiny, apple-red; a distinguishing color for a very distinguished pet: a balloon dog—one step up from the invisible dog! Walking away from a circus tent and the salutations of a congenial clown, Spencer takes his floaty new shiny, apple-red balloon-dog pet across the black-and-white pages, on leash of course, with great pride of ownership.

He cuddles New Pet, feeds New Pet, teaches New Pet a few tricks, bathes New Pet, reads a bedtime story, and snuggles up to some sweet dreams tenderly side by side. A trip to the veterinary office becomes a cause for concern when a pint-sized hedgehog flashes a potentially prickly quill in New Pet’s direction. Fearing the worst, a sharp pointy doom, Spencer bolts out of the office and into Part II: The Park.

Although excited by the other park dogs and their exuberant greetings, the park quickly becomes a scene of ever-more-dangerous sharp-pointy-doom objects. Canine teeth attached to other dog mouths, talons from a free-flying eagle, or pointy edges from a free-flying kite; bumble-bee stingers, fork prongs, tree-branch splinters, and cactus spines threaten balloon-dog pet’s safety.

The park is also the setting of Part III: The Party, where things get really intense. New Pet Balloon Dog gets caught up in the delights of birthday party games and a blindfolded pin-the-tail-on-the-donkey player makes a woefully wrong attempt. A resounding “POP” startles everything, making the reader jump as well.

If one where watching this as a film, this is where the tape would have spliced apart and the flap, flap, flap of the disconnected film section would leave a bright white blinding light on the projector screen until the projector operator was able to re-thread the film and the audience crowd would have moaned and groaned at the interruption, impatient about the delay, yet also building suspense as to what was going to happen next.

This, however, is where the narration will come to a halt, because this review will not divulge what happens next and spoil the ending. Suffice it to say, that the ending is well worth the wait and our congenial, happy-go-lucky circus clown saves the day, although whose day he ends up saving is the real kicker, making Spencer’s New Pet a clever must-read.