Speed Kings: The 1932 Winter Olympics and the Fastest Men in the World 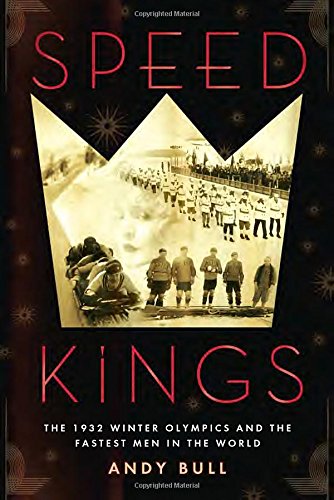 “as entertaining an adventure story as most great novels.”

Andy Bull’s Speed Kings: The Winter Olympics and the Fastest Men in the World is a refreshing, world of sports read, telling the tale of the U.S. four-man bobsledding team’s quest for the gold medal at the 1932 Winter Olympics held in Lake Placid, New York.

In the same vein as a “nonfiction fiction” book akin to a Jeff Shaara Civil War novel, author Bull takes a rich cast of true life sports figures to build a compelling story about the beginnings of the Winter Olympics games movement and the men whose various passions and personal motivations brought bobsledding along to become the main feature of the first Winter Games held in the United States.

Bull’s book draws together a list characters that include Hollywood stars, wealthy playboys, European aristocrats and for good measure a driven, high-handed autocrat within a narrative that would do justice to the cast of a 1930s Hollywood movie drama.

In many ways it is an improbable and entertaining tale filled with characters we can only wish would take the place of many of the vapid personalities who pass for cultural icons in our age.

Among them, Eddie Eagan, whose sports fame remains mostly lost to only the most avid boxing fan. His credentials include being a national amateur boxing champion, Yale graduate, Rhodes Scholar, a friend and boxing contemporary of both heavyweight champions Jack Dempsey and Gene Tunney, a boxing gold medal winner, and the first man to win a gold medal in both the summer and winter games. At 5-foot-11, 185 pounds, Eagan once handily beat an Australian champ who was a foot taller and outweighed him by nearly 70 pounds!

And he isn’t even the central character of the book.

That honor goes to Billy Fiske. “Fast Billy” Fiske was the son of a multimillionaire and the driver of the five-man sled that won an Olympic Gold medal in bobsledding when he was 16 years of age at the 1928 Winter Games held in St. Moritz four years before the games in Lake Placid. He later became a U.S. volunteer pilot for England in the Battle of Britain during World War II, a decision that ultimately cost him his life at age 29.

But what a life he lived in those 29 years. Fiske’s obsession with speed came to him naturally as he began setting speed records driving his green Bentley across Europe. That love for speed brought him to the world of bobsledding when one of his travels led him to St. Moritz and the beginnings of the sport of bobsledding.

His two other team members are Clifford “Tippy” Gray, who maintained a false persona so he could compete as an American; and Jay O’Brien, a gambler and rogue in personal life, who became the oldest man to win a gold medal. Bull brings each character to life through meticulous research resulting in believable dialogue, allowing the reader to believe they know exactly who the man actually was during his lifetime.

And of course no good story can exist without a capable villain. In this case it is Godfrey Dewey, son of Lake Placid developer Melvil Dewey, the founder of the lily-white Lake Placid Club and inventor of the library cataloging Dewey Decimal system.

Godfrey Dewey was a man used to imposing his will on those he encountered and was driven by a need to prove to an unforgiving and disgraced task-master father, he too could be a man of import and the one to restore the honor of the family name. That desire drove him to make the personal appeal to the International Olympic Committee where he successfully won the Winter Games bid for Lake Placid and then later, working tirelessly to overcome political and financial obstacles, to make the games a reality.

If Dewey had stopped there perhaps he would be remembered more kindly in the book, but his own personal demons led him to attempt to manipulate the process for choosing the participants in the bobsledding event to favor his local team and thus taint a remarkable achievement of being the prime architect of the 1932 Winter Games.

Through all the intrigue and bad weather, the games went on and the bobsledding competition, under the shadow of spectacular, bone-shattering crashes during world-record speed runs, continued, culminating in Fiske driving his team to the Gold Medal, becoming the youngest man to win his second gold medal in an Olympic games.

Bull’s book is as entertaining an adventure story as most great novels. It is all the better since it brings alive true life characters who lived with grit, courage, and determination.