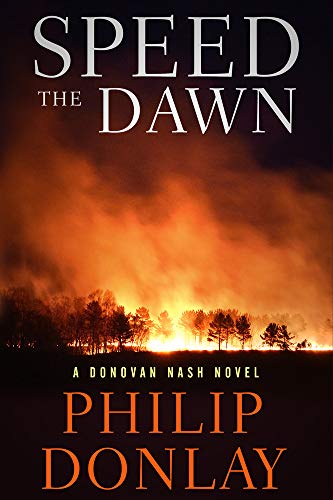 Hundreds of white-hot meteor fragments plunge toward earth near Monterey Bay, California. Huge fires ignite—dry landscape and, the sun sets, the power grid collapses and the fires grow, illuminating a nightmare created in hell itself. Donovan Nash realizes he is trapped.

Injured and growing desperate, his options dwindling, Donovan fights to keep himself and a small band of survivors alive until dawn, when they can make one last attempt to escape the inferno. Meanwhile, Donovan’s wife, Dr. Lauren McKenna, working with the Pentagon as well as the Forest Service, envisions a bold approach to stop the fire from spreading all the way to the Bay Area and the seven million residents living there. She’s terrified that, if not executed perfectly, her plan could cause the death of thousands of people—including Donovan.

With Speed the Dawn: A Donovan Nash Novel, Philip Donlay has delivered another superb suspense thriller. The eighth installment in the extremely popular Donovan Nash series, the author has created a new adventure that’s bursting with peril and mayhem. Writing from the basis of his own experience as a professional pilot, Donlay doesn’t hold back as the white-knuckle edge of your seat action starts on the first page as this novel.

“Lauren squinted as another burning object fragmented under the tremendous forces of high speed and friction, creating hundreds, if not thousands of small separate hazards racing downwards. The noise came all at once, like a sudden hailstorm. Instantly, hundreds of small pinholes opened in the ceiling. Lauren gripped the seat as the Gulfstream shuddered.”

Speed the Dawn continues in the same pattern of Donlay’s other novels with the tense, exciting, and action-packed thrills that puts wealthy environmentalist Donovan Nash right in the middle of a natural disaster. Fraught with danger and terrifying realities, Donlay effortlessly manages to bring new layers and situations to his multidimensional characters with each new installment.

Whether it’s by air, sea, or land, his writing style keeps the reader captivated. The plot is a twist on an old and effective theme, but Donlay succeeds in making it seem fresh and his own.

In an effort to retain tension, he adds chaos and a touch of hopelessness to the wild-ride narrative. The fear of being trapped and trying to find our loved ones during a disaster is palpable and heartfelt. Fast paced, spellbinding, and packed with exhilarating thrills and chills, Speed the Dawn is a well-written and electrifying novel. An outstanding addition to the Donovan Nash collection and quite possibly the best yet, the suspense will keep the reader glued to the edge of their seat until the very end.