Off Speed: Baseball, Pitching, and the Art of Deception 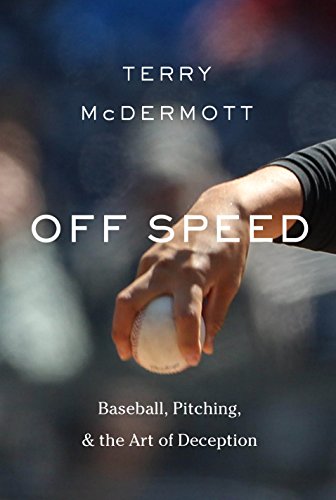 “Off Speed is very much like the perfect game it describes: a true gem.”

Terry McDermott’s Off Speed: Baseball, Pitching, and the Art of Deception is a wonderfully entertaining blend of baseball statistics and lore, deft personal memoirs akin to those found in A Christmas Story, with healthy doses of writing reminiscent of comedic writer Dave Barry—all interwoven around one of only 23 perfectly pitched games in Major League Baseball.

From terrifically turned phrases like describing the quickly-changing moods of baseball fans who go from ”golden California to deep, bleak satanic rain forest of gloom” in his preface, McDermott actually takes off from there, delivering a lovingly described passion for his Seattle Mariners, playing baseball on the sandlot fields in Iowa and melding those aspects of the book with a pitch-by-pitch account of the perfect game pitched by Mariner ace Felix Hernandez. All written from the heart with a bard’s touch.

Included also, are rifts on the beauty of fooling hitters with deceptive “not-fastballs,” which those engaged in the game at the major league level, consider unmanly. The author counters however, that the off speed pitch should be embraced as the most critical ally of a pitcher, allowing him to achieve his actual goal—to fool the hitter, not simply overpower him with a God-delivered talent of throwing a baseball 95-plus mph.

While many books combine several main themes, few sports books have as skilled a guide as McDermott who takes on the role of human box score, charting and describing every pitch from Mariner ace, Felix Hernandez’s perfect game in ways any baseball fan will appreciate.

In addition to recording every pitch and out, he brings the history of all of the nine kinds of pitches, their genealogy, documenting the pitchers who mastered them and the hitters who mostly flailed away at them over 150+ years of major league baseball.

He covers a lot of ground in less than 200 pages, but there is little wasted ink.   There are statistics enough for any baseball geek, but those are balanced against theories that propose a player’s success and or failure can be attributed to the simple odds year-to-year of the ball finding or not finding the bat and or open areas on the field.

As an added touch, McDermott also includes hilariously written asides in his footnotes including one relating to Reds and Phillies star Pete Rose that any true fan of baseball will enjoy.

Off Speed is very much like the perfect game it describes: a true gem.