The Spectre of War: International Communism and the Origins of World War II (Princeton Studies in International History and Politics, 184) 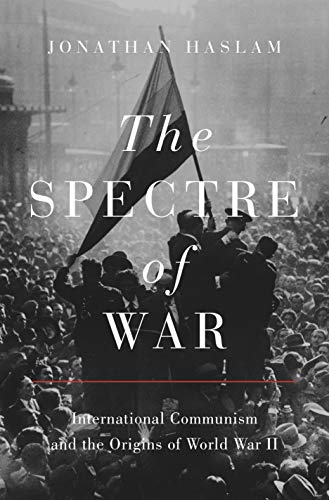 “This is a terrific book, a brilliant reexamination of the events leading up to the greatest conflict in human history.”

The story of the origins of the Second World War has been told many times. The usual starting place is Hitler’s coming to power in Germany in 1933 determined to undo the “harsh” terms of the Versailles Treaty that ended World War I. That is followed by the tepid response (known as appeasement) by the European democracies—especially France and Britain—still traumatized by the losses of the Great War. And finally, as war clouds gather, the European diplomats fail to erect a collective security regime to deter Hitler, who reaches a fateful agreement with Stalin that spells doom for European peace.

In his new book The Spectre of War, Jonathan Haslam, the George F. Kennan Professor in the School of Historical Studies at the Institute for Advanced Study and a fellow of the British Academy, reexamines the conventional history and identifies a long-ignored but important factor in the story: international communism.

“The purpose of this work,” Haslam writes, “is . . . to return international Communism to where it actually was at the time: never far from centre stage, as an enduring if at times unspoken threat to those in charge of government on both sides of the Rhine; to return it . . . to the spotlight in accounting for the drama that unfolded between 1919 and 1941.” At this, he succeeds magnificently.

When the Bolsheviks seized power in Russia in October/November 1917, they proclaimed their victory as the beginning of a world revolution against capitalism. The other European powers took that proclamation seriously, especially when communist parties formed in other countries and were aided and abetted by the Comintern—the Bolshevik’s instrument of world revolution.

Haslam notes that Western fears of international communism were not unfounded. With discontent and potential rebellion rife throughout Europe, he writes, “Lenin poured millions of dollars into furthering unrest worldwide.” “Within a matter of months [after its formation],” Haslam continues, the “Comintern’s impact could be detected everywhere,” including in Germany and Italy, but also in Britain and France.

Some Western powers intervened in Russia for a variety of purposes after the Bolsheviks seized power, including half-hearted and ineffectual efforts to strangle the infant Bolshevik regime in its cradle. Later, the communists would make great propaganda use of what Haslam calls the “allied war of intervention.” The Bolsheviks sincerely believed that the communist revolution needed to spread in order to survive in Russia.

Haslam rightly insists that during the interwar years the threat of communist revolution “lay at the core, not along the periphery, of conflict and conflict resolution in Europe.” It impacted the foreign policies of Britain and France, helped lead to the rise of fascism in Italy and Germany, and shaped the outcome of Spanish Civil War in the mid-to-late 1930s.

Time and again, Haslam shows, European statesmen pursued policies at least in part due to their fears of communism, and they rightly understood that the Soviet Union controlled the Comintern and continued to support world revolution. This explains to some extent Britain’s unwillingness to seriously pursue a collective security arrangement with the Soviet Union in the mid-to-late 1930s, and the Western leaders’ preference for appeasement of Hitler.

There were, of course, other factors at play: a desire on the part of British and French leaders to avoid the carnage of another world war; a desire, especially among British leaders, to avoid extra expenditure on armaments; the widespread belief that Stalin’s purge of his officer corps had rendered the Soviet armed forces less reliable; the belief that Germany had been mistreated by the Versailles Treaty; and the belief that Germany’s geopolitical aims were limited.

Haslam, however, contends that central to British and French foreign policies in the interwar years was the belief that Germany—even under the Nazis—was a necessary bulwark against communist expansion. He calls this “an overriding and debilitating preoccupation with Bolshevism,” which clouded the democracies’ geopolitical judgment. Geopolitics would have counseled the necessity to temporarily ally with the Soviet Union to forestall the more immediate threat of German expansion—just as it did during the Second World War. But the specter of revolution dimmed the specter of war.

The Nazi-Soviet Pact of August 23, 1939, shocked the world. British and French leaders thought that the Nazi-communist ideological divide would prevent such an agreement. In this, Haslam writes, they “failed to take account of the shared provenance of both Bolshevism and fascism . . . Western statesmen and officials could not see that the common, underlying hostility of Moscow and Berlin to liberal values and bourgeois democracy could bind them.”

Communism and Nazism were both revolutionary expansionist ideologies. The Nazi-Soviet Pact enabled both powers to extend their imperial control over parts of Eastern and Central Europe, and set Europe afire. When in June 1941, Hitler’s armies invaded the Soviet Union, Britain (and later the United States) immediately understood that the enemy of my enemy is my friend; something they should have understood in the mid-1930s.

The Second World War produced the geopolitical outcome that British and French leaders sought to prevent in the 1930s—the Soviet Union expanded westward. The Nazi threat was replaced by the Soviet threat. Europe became a battleground in the Cold War. And throughout the Cold War, Haslam notes, some Western leaders thought that the Soviet communist regime would become a “normal” power—but it never happened. The goal of world revolution was never abandoned. The Cold War ended when the communists lost power due to Western pressure and internal weaknesses.

This is a terrific book, a brilliant reexamination of the events leading up to the greatest conflict in human history.