Space Odyssey: Stanley Kubrick, Arthur C. Clarke, and the Making of a Masterpiece 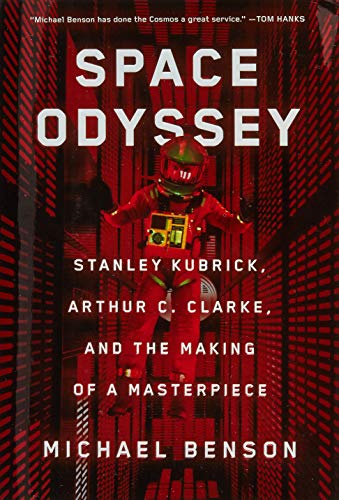 Fifty years after its release, Stanley Kubrick’s 2001: A Space Odyssey upholds its iconic status and for good reason. Kubrick set new standards for movie special effects long before CGI and desktop computers were conceived. Both American astronauts and Soviet cosmonauts praised the film’s realism in depicting space travel. On another level, 2001 ripped science fiction films from routine B-movie space operas, vaulting them into the realm of the metaphysical.

By all standards, this is a movie that should have failed. The opening sequence, titled “The Dawn of Man” consists of pre-human apes cavorting on the African plains; Flash Gordonesque interstellar battles are replaced with a ballet of spaceships orbiting Earth; not a word of dialogue is spoken until 40 minutes into the film; the end of the cosmos is depicted as a Louis XIV bedroom suite; God is either a black monolith or floating super-fetus; and Satan is a soulless talking computer represented by a glowing red lens.

Volumes on 2001 could stuff any cinemaphile’s bookshelf. But at last the film has found its worthy chronicler in Michael Benson and his engrossing new work Space Odyssey: Stanley Kubrick, Arthur C. Clarke, and the Making of a Masterpiece. Benson combines his background as a writer/artist/filmmaker specializing in celestial deep space projects—both real and imagined—with a journalist’s dogged pursuit of detail and a novelist’s gift for engaging storytelling.

There have been several “making of” books on 2001, including a behind-the-scenes reminiscence by the film’s other driving force, Arthur C. Clarke. Benson’s book goes further than all these previous volumes combined.

Using archival materials including letters, legal documents, and production logs, along with new interviews, Space Odyssey gets to the heart of what made 2001 work. With this mass of material, Benson gets us inside Kubrick’s mindset on the film, from conception to legacy.

The author pays close attention to the technical engineering of the film’s groundbreaking special effects, using a layman’s voice that guides readers through the intricacies of what’s on screen—right down to the technical specifications driving the mouth movements of the man-apes in The Dawn of Man sequence.

The story behind 2001 might best be summed up in Orson Welles’s famous dictum that a movie studio is the biggest electric train set any boy could dream of. Based on the success of his 1964 satire Dr. Strangelove or: How I Learned to Stop Worrying and Love the Bomb, Kubrick became a Hollywood wunderkind, a maverick director who took advantage of a dying studio system still pouring money into classy films that screamed “Art!”

The stream of cash flowing from MGM’s studio headquarters to Kubrick’s nerve center outside of London seemed unending, giving the director the flexibility to experiment in ways never imagined by such luminaries as Alfred Hitchcock, David Lean, or Billy Wilder, three directors considered as possible replacements to helm the film should Kubrick not work out.

Decisions were often spur of the moment; at one point Gary Lockwood, playing one of the astronauts aboard the deep space Jupiter mission, was convinced he would be fired after questioning the director on one of the film’s turning points, the paranoia of the space ship’s guiding computer HAL 9000. Instead Lockwood found his ideas incorporated into 2001 following a bull session with Kubrick over tequila, Chopin, and bagels.

Douglas Trumball, arguably the guiding force driving the film’s intricate depictions of space travel, battled with Kubrick over creative control of visual effects, for which Kubrick earned a solo Oscar (his only Academy Award, for that matter). It was a point of bitter contention between the two men, one that lasted for years.

One of the book’s most fascinating sections is the creation of The Dawn of Man sequence, which was choreographed by an American mime who also took on the role of the lead pre-human. A key factor in the film’s overall success to be sure, and fueled by the man’s secret addiction to the cocaine and heroin combination known as speedballs.

If anything, the book’s subtitle isn’t exactly right. Clarke, by this book’s account, got shoved to the side by Kubrick once production on 2001 commenced, and he becomes an eccentric bit player, beleaguered by money problems and his desire to fund a James Bond parody shot near his home in Sri Lanka.

When it comes to business deals regarding Clarke’s adaptation of the film into a novel, Benson gets bogged down in mundane details on how book deals are struck, bantered back and forth, and finally settled. It becomes a monotonous thread throughout an otherwise engrossing read.

Ultimately, 2001: A Space Odyssey is forever linked to Kubrick, and rightly so. With Space Odyssey: Stanley Kubrick, Arthur C. Clarke, and the Making of a Masterpiece Benson gives the film’s legions of fans unparalleled insight into the large and small of what made 2001 2001—a cinematic experience that still dazzles the imagination.