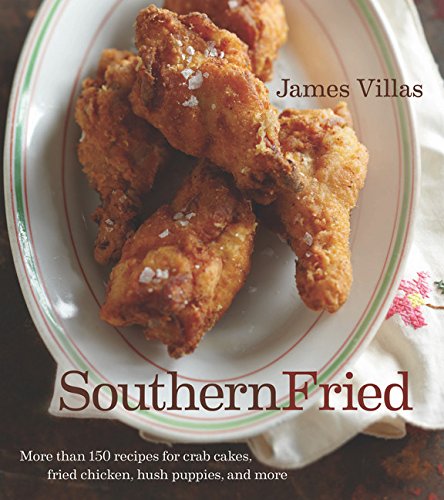 Careful now: Open your copy of Southern Fried and listen—do you hear all those people talking back to James Villas?

“No, no, no, those fried green tomatoes need more flour!”

“Granny never made fried apple pies like that—where are the dried apples?”

“Since when do Southerners include omelets in their list of famous fried food?”

“Why’re you gussying up my fried okra like that?”

“And sir, surely you didn’t mean to leave out Granny’s way to make skillet-fried corn?”

But take a breath, rest assured that you and Granny are always right, and look again: These recipes might start more than a few spats about what constitutes a compendium of Southern fried food, but they offer a useful look at some of the basics and best-loved recipes, with a few unusual offerings thrown in—at least for experienced cooks able to adjust recipes as they go and figure out which ones to avoid.

Because, while many of the recipes seem intriguing on first read, too many of the tested recipes disappointed. Clam fritters sounded interesting and like a great pantry supper because Mr. Villas calls for canned clams and staples such as eggs, parsley, cornmeal, and a quick homemade tartar sauce with mayonnaise, relish, scallions, capers and mustard. Good thing there was a sauce to liven things up, for these fritters were bland and gritty, overpowered by the cornmeal.

And before we go any further, a repeated complaint: Mr. Villas does not give cooks even a starting point for quantities of salt and pepper. “Salt and freshly ground pepper to taste” simply isn’t good enough in a book that otherwise gives precise amounts—such as a teaspoon of mustard for that cup of tartar sauce.

At the point a cook should be adding them “to taste,” the last thing that cook would want is to taste it—that is, when it’s raw-egg batter. Sure, a good cook would fry up just a bit, taste it, and adjust—but a good recipe would give starting amounts from which to adjust. This is a continuing issue with Mr. Villas (see the review of Pig), and it’s lazy recipe writing.

A similar lack of precision affects a recipe for fried peanuts, which calls for seasoning the frying oil with “Tabasco to taste.” Are we supposed to taste the 350-degree oil? It’s a bit scary anyway to have wet Tabasco in hot oil. And of course, you should also “salt to taste” the peanuts while still hot . . . while this is more reasonable than when these directions come before frying, this still could use a starting point, because the nuts are too hot to taste at first.

And of course, a third recipe, for squash puppies (grated summer squash in a batter meant to mimic hush puppies), also calls for you-know-what before the raw-egg batter gets fried. That wasn’t the only problem with this recipe, though, which came out far too wet to hold together, with just six tablespoons of flour to four yellow squash, two eggs, a grated onion, and two tablespoons melted butter, among other ingredients.

With significantly more flour and somewhat more Parmesan cheese added to hold things together, though, this was the tastiest of the lot. (Here again, although recipe headnotes do not demand precision when suggesting variations on a recipe, Mr. Villas could have offered a bit of help. He suggests substituting winter squash, rutabagas, even sweet potatoes for the yellow squash—a lovely idea, but a ballpark quantity to match that of “4 medium yellow squash, grated” would have shown readers some respect.)

None of these were tested for this review, so reader beware . . . but do take a look. Whether skillet-fried, deep-fried, or sometimes just cooked in a skillet, stretching the definition of “fried” (such as scrambled eggs with cheese), these recipes will give cooks a broad overview of the delights to emerge from a Southern frypan.