A Southerly Course: Recipes and Stories from Close to Home 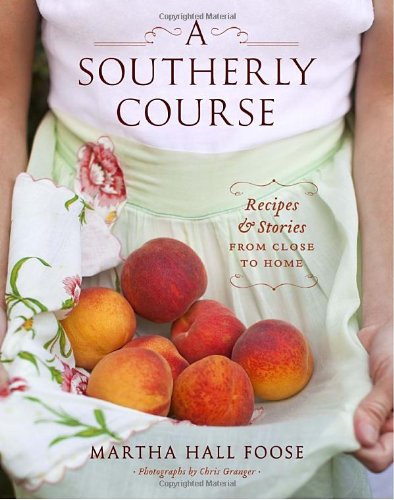 Hey y’all, think you might could mosey down to the Delta with Martha Hall Foose for some good eatin’ and readin’? Right here, bless her heart, we got us some fine tales that we’re thinking you might take a shine to.

Mercifully, those tales won’t involve reading anything like that.

With Martha Hall Foose’s first book, Screen Doors and Sweet Tea, readers were charmed by mouthwatering recipes and some gentle stories of the Mississippi Delta—stories that felt authentic without laying on the Southern charm too thickly.

Ms. Foose’s second cookbook, A Southerly Course, offers more tales of Ms. Foose’s neighbors and food inspirations tucked into the headnotes of most recipes. Especially at first—and especially for readers who missed the first book—the stories can feel random, a bit forced, and sometimes unnecessary. But those who take the time to settle in with the book for a bit will find the stories sweet enough—and the recipes well worth marking for experimentation.

Ms. Foose talks in the introduction of Southern culinary eccentricity, and that trait keeps this book from being yet another compilation of Southern standards. Although many of the recipes offer straightforward Southern specialties—such as thick sweet potato fries, chicken liver spread, skillet fried corn, pan-fried fish, custard pie, and blackberry jelly roll—there are more than a few pleasant surprises. Southern-with-a-twist ones include pickled crawfish tails, pickled quail eggs and sausages, and pimiento cheese soup (not entirely new, but worthy of wider renown), collards in a dumpling soup, sweet-and-sour salsify, and asparagus with country ham and egg gravy.

Others come from Ms. Foose’s experience, and the variety is a welcome touch—from kibbeh to a variety of venison recipes, to peas with paneer and soy sauce- and sake-glazed grilled scallions.

The first recipe tested was fine but not outstanding. Chicken drumsticks marinated in a mixture that includes Mexican Coca-Cola, ginger, Worcestershire sauce, onions, and garlic tasted surprisingly subdued—and cooks should be warned that they’ll need a very big pan in which to simmer all four pounds of drumsticks.

Other recipes, though, provided far more flavor, rarely with any great effort. “Sausage Dinner,” essentially a popover or pannekoeken batter over Italian sausages, makes a comforting supper with little work, surprisingly tasty given its short ingredient list. (In testing the onions and sausage were cooked longer than called for in order to cook off most of the liquid—likely deepening the flavor of the onions.) One quibble: Why tell cooks to pour in the batter then season with salt and pepper? Given that there’s no real way to know how much salt or pepper is needed until the dish finishes baking, the recipe should provide some guidelines on amounts.

Crawfish bread—turnovers filled with a mix of crawfish, smoked Gouda, chili sauce, and onion and bell pepper)—provided a winning flavor combination. The dough, quickly made with eggs and ricotta cheese, but no butter or other fat, could be tricky for a novice baker. A recipe that offers no range of liquid to use could frustrate a baker when, as in the recipe test, the dough was far too dry to come together. Adding both more milk and more ricotta worked, producing a tender, moist wrapper for the crawfish.

Pickle-braised pork also offers deep flavors while requiring almost no time from the cook. Pork shoulder takes a quick sear then gets mixed with relish and barbecue sauce before going into the oven for three hours. The recipe calls for searing slices of the cooked pork before serving, but a lazy cook could skip this step and still be satisfied.

The desserts chapter offers fewer surprises, though still well-executed, with basics such as upside-down cake, cheesecake squares, carrot cake, baked Alaska and fudge. A blackberry jam cake, with jam and spices in the cake batter and caramel in the cream cheese icing, makes just the sort of sweet, old-fashioned dessert to finish a Southern Sunday supper. Funnel cakes, fried in just 2 cups of oil, bring the taste of a country fair home with ease. And if you grow daylilies, an apricot mousse served in daylily-lined flutes makes an impressive presentation.

The book breaks recipes down by “courses,” with chapters on appetizers, salads and soups, vegetables and grains, main dishes, and desserts. Each chapter opens with a list of recipes, though not unfortunately, with a page number for each.

Many of the recipes could use a bit more detail (what kind of cherries in the cherry pie?) and are not for complete novices, but they generally take a clear, to-the-point tone in explaining the process.

With nary a y’all in the book, Ms. Foose has, again, produced a book of Southern-ish recipes that retain the South’s best flavors without its clichés.