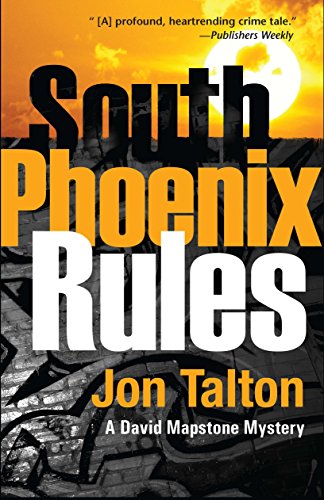 Noir in blazing sunlight? Reach for a cold glass of water and read on. . . .

The gripping prologue to South Phoenix Rules is chock-full of testosterone-laden thugs armed to the teeth with every conceivable death-pistol imaginable, and soon sets the relentless pace from this latest thriller by Jon Talton.

The oppressive August temperature in Phoenix is reaching 114 degrees—and that’s just in the shade. The horrendous heat carries a special color for which even the great poet Dante would have difficulty describing adequately. But soon it’s going to get even hotter for historian and newly resigned deputy police officer, David Mapstone. N.Y.U. Professor Jax Delgado comes to Phoenix apparently to conduct research for his next book.

Once in town, he meets the beautiful and free-spirited Robin Bryson, and soon they begin dating. Shortly afterward, Delgado is brutally murdered, and police believe they can connect him to one of the world’s most deadly drug cartels. Suspicion initially falls on Robin, who just happens to be Mapstone’s sister-in-law. Robin is staying at Mapstone’s home while his estranged wife, Lindsey, is in Washington with an elite anti-cyber terror unit.

Upon hearing of the killing of Delgado, Lindsey makes one demand of Mapstone: Protect Robin at all costs. Easier said than done. Is Robin as innocent as she claims? Or is she hiding something dark and sinister? Mapstone has yet to decide before getting embroiled into Delgado’s murder. Into the mix comes Detective Sergeant Kate Vare, out to prove that Robin and Mapstone were somehow involved in the murder of Delgado.

To say that Vare and Mapstone don’t see eye to eye would be an understatement. There’s as much history between the two as there is in the books Mapstone reads. Mapstone’s analytical mind is always one or two steps ahead of the villains in Phoenix, but when it comes to the trilogy of strong women in his life—Robin, Lindsey and Vare—his thinking is miles away. This makes him more human, more flawed, someone we can relate to, rather than some superhuman and two-dimensional Shamus with all the answers.

One little niggling criticism of the storyline has to be addressed, though: South Phoenix Rules is the sixth book in the Mapstone series, and for those readers jumping into their first Mapstone book, some more information could have been planted in the early pages regarding his estranged wife. It takes just a little too long to unfold in this particular case, and could have been ironed out closer to the beginning, if just to bring the reader on-board faster.

That said, South Phoenix Rules is a haunting noir story vividly rendered by Talon’s white-hot prose. The plot is complex with genuine twists you never see coming, and the droll dialogue is sarcastic, fast, and nose-breakingly violent. Happy-ever-after, South Phoenix Rules is not, but those wishing for an original slant on crime fiction should pick up this impressively unyielding noir story and quickly add it to their must-read list. You won’t be disappointed.