South to America: A Journey Below the Mason Dixon to Understand the Soul of a Nation 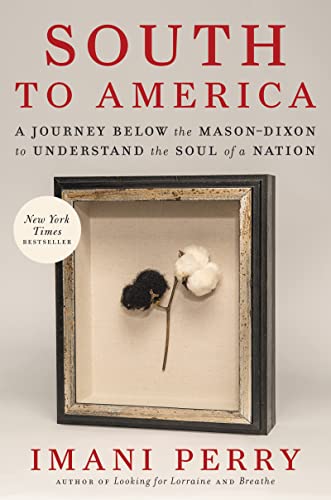 “If America was forged and reforged in the South, then it can be healed and reinvented there as well (and perhaps it must be so).”

South to America is a new addition to a rapidly growing body of recent work that explores the Black experience in historical and contemporary framing. Imani Perry argues that the South is actually central to understanding the arc of American history—its imprint can be found broadly throughout the social, political, ideological, and cultural mores that exploded, like starbursts, out of the South.

She argues that the centrality of the South is lost to a particular kind of erasure. The South takes the fall for the country’s heritage of racism and slavery. This has a double entailment. First, it allows the rest of the nation to conveniently forget its own deep entanglement with those ideas and practices; for it is the South to blame. Second, it allows the broader nation to then reify the South through a variety of brittle stereotypes as provincial, backward, less educated, poor, accented, unequal, irrelevant, and, of course, bigoted and racist. It’s little wonder, then, why her argument provocatively cuts against the national discursive grain and provides an interesting entry point into the discussion of the South in the crafting of America.

This is, of course, not a wholly novel insight. Renowned journalist R. W. “Johnny” Apple, in his work on the civil rights movement in the early 1960s, clearly understood the centrality of the South as it shaped broader dynamics in the country. Elsewhere, Pulitzer Prize-winning author Diane McWhorter saw the centrality of the South with a somewhat different spin than Perry when she writes:

“In the case of Birmingham . . . closure has been an impulse to forget the past rather than to examine and preserve it. And reconciliation has often been sought in a vacuum with no corresponding pursuit of understanding. Perhaps the reason the South has not had to face its guilt is that it really did not lose its war. Certainly, it conceded the battle over legal segregation and stopped condoning dynamite-happy vigilantes, but the southern outlook was simply exported out in code to the rest of the country.”

For McWhorter, because the South was not held accountable for its legacy of racial dynamics, its white majority also is allowed to engage in an internal amnesia.

What makes Perry’s work unique is its weaving together of history and personal narrative that draws in historical figures about whom most of us know little to nothing, her kin and their stories, as well as her own experiences in traversing the South while conducting research for the book. As such, her book has a fellow traveler in Clint Smith’s How the Word Is Passed. Her unpacking of Southern identity politics is nuanced, complex, and multilayered with no easy or facile conclusions.

Throughout the book we get a strong sense of the South with its racialized through line that defies transformation:

“I am American. That means something to me . . . two warring souls—Black yet American. You face it in its most raw truth below the Mason-Dixon Line. To be an American is to be infused with the plantation South, with its Black vernacular, its insurgency, and also its brutal masculinity, its worship of whiteness, its expulsions and its massacres, its self-defeating stinginess and unapologetic pride.”

In dynamic contrast, Perry also wants to complicate this dominant construct by underscoring the South’s diversity and complexity without denying its fraught, traumatic, and often violent history of human subjugation. Indeed, the capitalized “S” suggests a unified culture area. At one point, she ponders this and suggests that the South may be best thought of in broad geographical terms as what it is not: the Northeast or the Midwest.

Race and the oppressive human hierarchies that it creates and sustains is at the very core of the American experience. Perry excels at exploring its particulars as she moves across the South with Alabama serving as, arguably, the most iconic example. And, as Perry notes jokingly, “All roads lead to Alabama.”

The state was founded on enslaved agrarian labor, most notably in the cotton-rich “Black Belt” that runs across the south-central part of the state where the only people in “high cotton” were the rich planter class whose fortunes were made off the backs of an abundant, exploited, and terrorized Black workforce.

It was also founded in places like Birmingham, the “Magic City,” which was a southern Pittsburgh, an iron and steel boomtown that flourished after the Civil War. While its laborers were not enslaved people, they were hardly free. In an apartheid-like economy, they were a permanent underclass doing the most dangerous, exhausting, and lethal jobs. Yet former enslaved rural agrarian workers and their kin still migrated to Birmingham, which says it all about conditions in the “Black Belt.”

Alabama also served as the epicenter of the civil rights movement—from the heroic protests in Birmingham to the march to Montgomery across Selma’s Edmund Pettis Bridge. It broke the back of the segregationist South.

While Alabama is hardly a bastion of progressive social and racial justice today, it is, arguably, the center of truth telling and healing. Imagine that in Montgomery, the former capitol of the Confederacy, there now exists the Equal Justice Initiative and the National Memorial for Peace and Justice. The EJI is dedicated to prison reform in a state that weaponized incarceration against its Black population. The memorial honors Black lynching victims across the US. Virtually in the shadow of Jefferson Davis’s first Confederate White House, it is a testament to reconciliation and healing through truth telling and an engagement with a traumatic and shameful past.

Indeed, if America was forged and reforged in the South, then it can be healed and reinvented there as well (and perhaps it must be so).