Soup: The Ultimate Book of Soups and Stews 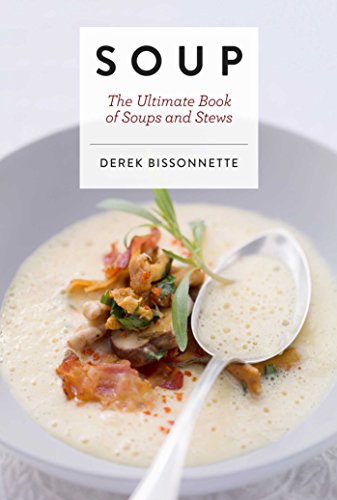 "Bissonnette’s enthusiasm and creativity shine throughout Soup, a cookbook that will change the way you look inside your stockpot."

Chef Derek Bissonnette is CIA-trained in baking and found fame cooking at Kennebunk, Maine’s, renowned White Barn Inn and at the even more acclaimed Inn at Little Washington in Washington, Virginia. He eventually became Chef de Cuisine at The White Barn, and has since opened new restaurants and became a darling of celebrities in need of offsite catering.

Along his hard-fought way to culinary success, Bissonnette taught himself photography. After 22 years in restaurant kitchens, he now spends his time as a professional food photographer. This skill obviously came in handy when illustrating the whopping 300 recipes in his new book, Soup: The Ultimate Book of Soups and Stews.

When it comes to recipes, Bissonnette’s goal was to create soups easy enough to appeal to home cooks, yet exciting to professional chefs. His approach to pleasing this divergent audience relies on recipes with simple, straightforward instructions and unusual combinations of mostly familiar ingredients.

A good example of this delicate balancing act is his Beef and Braised Cabbage Soup with Horseradish Cream. Instead of calling for the usual chunks of overcooked tough beef, Bissonnette quickly bakes sirloin steak in a hot oven and artfully arranges rare slices on top of the soup. His Parsnip and Pear Soup is equally simple yet fanciful, with the soup base topped with spiced poached pears and blue cheese crumbles.

Although most recipes are appropriate for a light soup course, many, like the Beef and Braised Cabbage, fall into the hearty category and would easily make a whole meal. Ham Hock Soup, for instance, is chock full of vegetables, beans, and tomatoes. The Chilled Tuna Niçoise Soup calls for chunks of potato and large pieces of tuna that are topped with a poached egg, and a bowl of the fish-rich Seafarers’ Stew would keep the hungriest limey satisfied for hours.

Several soups are made substantial by their accompaniments. Broccoli and Cheddar Soup gets a burst of spicy flavor from Parmesan Crisps. Tummy-filling Blue Cheese Fritters stand majestically in the Irish Leek and Cashel Blue Cheese Soup. The side for Irish Country Soup is a from-scratch Soda Bread. Various breads appear alongside many of the soups, and Bissonnette gives uncomplicated recipes for them all.

A large part of this cookbook takes the cook around the globe. Bissonnette gives his versions of familiar Italian soups, such Italian Wedding Soup, along with a Greek Avgolemono and a Russian Pea and Barley Soup, as well as Borscht. Other ethnic soups are influenced by those native to Thailand, Bulgaria, Cambodia, the Caribbean, Hungary, France, Mexico, and Morocco. There’s also a sweet potato-based African Peanut Soup, and a Scottish offering of haddock, leeks, and potatoes called Cullen Skin.

It would be hard to overlook the tempting array of Thai soups, as well as an interesting one from Japan called Tanuki Jiru, which is made with pork, but was traditionally made with raccoon.

One of the most intriguing chapters is for chilled soups. Aside from the expected gazpacho and vichyssoise, Bissonnette presents tantalizing recipes such as Chilled Mango, Coconut, and Curry Soup, Chilled Avocado Soup with Crab, and the dessert-worthy Chilled Strawberry and Tomato Gazpacho with Roasted Strawberries.

In every classic recipe, Bissonnette puts his own spin on things. For the most part, these deviations work deliciously, but in a few cases the cook might be left scratching her head. In particular, Crab and Oyster Gumbo is served over orzo instead of the expected rice. And the Seafood and Sausage Gumbo calls for calamari, a mollusk foreign to the Creoles and Cajuns who invented the dish.

Straying from the norm, however, is what makes this book stand out from the pack. Bissonnette’s enthusiasm and creativity shine throughout Soup, a cookbook that will change the way you look inside your stockpot.