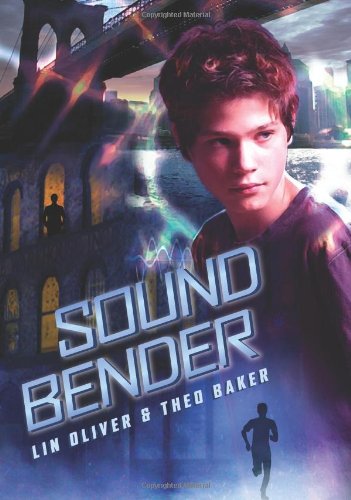 “Sound Bender is a fast and involving read, and it’s worth recommending to the kids.”

“I don’t know why I have this power, but there has to be a reason. I have serious work to do in this world and I can’t be a scared little kid anymore.” —Leo Lomax

Leo Lomax and his brother Hollis have been recently orphaned and placed in the care of their uncle Crane, who is as far from their father as he possibly could be: He’s cruel, materialistic, has a terrible temper, and expects kids to act like adults. But he’s also very rich and he can give them anything they want, if they behave. The day that he turns 13, however, Leo gets a package from his father, mailed before he died, that changes his life. Inside is a letter telling him he was born on a remote island and blessed by a shaman to be something different than a normal kid, and a recording of the ceremony that gave him his true name: Sound Bender.

It’s a slightly silly premise, and the book is sometimes too simplistic to overlook the silliness, but in general, this is an involving and interesting read. Almost nothing of it is like anything read before, and at every point the story surprises. It does take a long while to get to the actual action of the plot, but since this is a coming of age story in the oldest sense, like a strange myth, Sound Bender benefits from having us understand Leo’s situation and see his power growing and how he learns to use it.

The real action kicks in when Leo finds a helmet that radiates evil and hears a piece of its history that drives him to solve the mystery of what it is and what it was used for.

The end feels as if another book should be forthcoming, but it wraps up most of the storylines including all of the big ones. It would have been nice to see more of Leo’s relationship with his brother evening out, but there was already a lot going on at the end, so perhaps that’s why it was sped up a little too much.

Sound Bender is alternately sweet and funny, mysterious and adventurous. Adults may find the moral dilemmas a bit oversimplified or vague, but younger adults, at whom the book is aimed, will most likely not notice. There is an ecological message and a statement against war that might come across as a bit blunt, but it’s also not really belabored and so never eclipses the story itself.

Sound Bender is a fast and involving read, and it’s worth recommending to the kids.