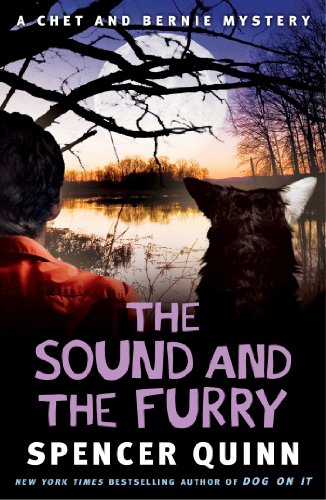 Road Trip! Bernie Little and his faithful companion Chet the Jet head to Louisiana in their latest adventure.

As the narrator Chet frequently reminds the reader: a lot of perps are breaking rocks in the hot sun due to the Little Detective Agency. While out for a drive in the Arizona desert, Bernie and Chet see Frenchie Boutette if not exactly breaking rocks, then picking up trash by the side of the highway. Frenchie wants to hire them.

Frenchie is from Louisiana, and admits he and most of his brothers have been involved in nefarious dealings, but not his brother Ralphie. Ralphie is smart and has always been on the straight and narrow (except for those times when he took tests for his brothers) but now he’s disappeared.

Maybe those no good Robideaus are involved—the long running feud between the families is well known. But how could that involve Ralphie? He’s an inventor.

Bernie agrees to take the case, and gets a healthy retainer (Chet smells shrimp on the money). Within 12 hours, Bernie is offered a job with a bigger payday in Alaska, and a member of the Queiros gang tries to attack him.

Thanks to Chet, the gangbanger ends up a whole lot worse off.

When that gets cleared up, Chet calls shotgun and the much loved Porsche sets a course for the Louisiana swamp country.

Listen to Spencer Quinn’s mastery in understanding and translating the canine mind. When someone asks how much Chet weighs—a normal question to those of us with big dogs, Bernie is not sure.

“Getting him on the scale’s not easy,” Bernie said.

And Chet thinks, “I remember that game! Bernie tried to pick me up, maybe with some idea of standing with me on the scale. Lot of fun, but nobody picks me up, amigo.”

Once in the bayou, the reader meets a colorful cast of characters, including Frenchie’s one eye mama, and an old pal of Bernie’s from the war, now working for the NOPD. And Chet has a close encounter with Iko, the gator who would love to make a meal of him.

After sorting out some dead birds, a huge shrimp heist, and Cleotis—the drug dealer who tells the duo “We’re all prisoners of one culture or another.” —the case is wrapped up.

Spencer Quinn’s masterful job of having a canine narrator isn’t cutesy, nor does it grow tiresome, a tribute to his wordsmithing.

They make a great team, Chet and Bernie.

We divide up work at the Little Detective Agency, just part of our great business plan. Bernie handles the whys. I bring other things to the table.