This Is a Soul: The Mission of Rick Hodes 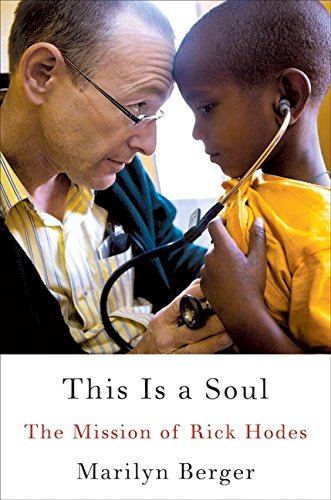 Rick Hodes grew up on Long Island. There was nothing in his background to suggest that he would become a doctor who devoted his life to some of the sickest and poorest souls on our planet. But helping people is for him innate. And so, when as a young adult, like many others he saw swaths of the underprivileged world, including lands where poverty and sickness are the most defining characteristics, his natural response was to become a doctor so that he might do some good for those most in need. Author Marilyn Berger points out that he seems addicted to helping people. Each day he inhabits a galaxy where his thoughts and actions seem to rarely fasten upon much else. He is a man on a gloriously obsessive mission to reduce human suffering. And in this he has and continues to succeed.

Marilyn Berger, in writing about Rick Hodes, does not hide her admiration. Still, she writes with a sober voice that allows the compelling facts to speak for themselves, or at least overshadow her restrained characterization. This cannot have been easy as the author; after spending time with Rick in Ethiopia, she eventually adopted one of the many children in need as the substance of her book’s research bled fully into her life.

There have been many books written about individuals who have devoted their lives to saintly pursuits. Fortunately, we remain, for the most part, an empathetic species so that books such as This Is a Soul continue to tap into our humanity. And in so doing, they fill us with hope.

Early in the book, the author provides startling context for the enormity and generosity of Rick Hodes’ mission. “[T]here are more Ethiopian doctors in the Washington, D.C., area than in their entire homeland.” She later adds that various diseases and worms “are so common . . . that when Ethiopians are sick, they say ‘my worms are not eating.’”

Rick’s works as detailed in the book are easily summarized. Having chosen to devote his life to helping those in poverty and the gravely ill, every waking moment of Rick’s day is devoted to treating patients, corresponding with doctors and others who can help him be ever more effective, arranging for treatment outside of Ethiopia where necessary, traveling to other countries experiencing widespread health crises, and making a home for his five adopted children and the fifteen or so others whom he has welcomed into his household.

Rick, a Jew, did not have a highly devout upbringing. Only later in his life did he become Orthodox. The choice to embrace religion in this way seems to have been inspired by his fundamental nature. Religion did not teach him to help others. Rather, this was already in his blood. Religion provided a sturdy framework for the deeply spiritual way Rick was already living his life. It also appears to provide a measure of solace when Rick’s efforts to save a life are unsuccessful. And this perhaps sustains him because he has not sought the emotional distance most doctors are encouraged to embrace in order to maintain their own emotional equilibrium.

“Doctors always ask when I send photos, why I don’t just send the X-rays and blood studies.” Rick’s reply: “I want them to know this is a human being. . . . This isn’t just a [misshapen] back. This is a soul.”

This Is a Soul is lucidly written. The author’s prose has a very natural cadence. She does not dazzle with well-turned phrases. To do so would have detracted from her unvarnished account. Certainly the book shall never be considered great literature. Instead the author has provided a public service. By telling the story of Rick Hodes in plain English she reminds us of what it means to be human and hopefully inspires many to donate their money or their time to support Rick Hodes’ work.
To donate click here.*

*The New York Journal of Books as a rule does not embed links in proximity to reviews. In this case, an exception is easily warranted.