Soul City: Race, Equality, and the Lost Dream of an American Utopia 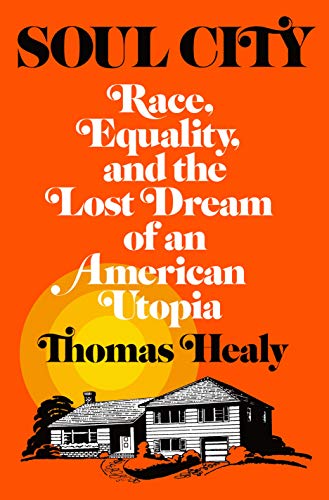 American history is “littered with utopian experiments that began with giddy promise and ended in depressing failure,” writes Thomas Healy. In Soul City, he tells one such story.

In the late 1960s, Floyd McKissick (1922–1991), a lawyer, militant black leader, and former head of the Congress of Racial Equality (CORE), a major civil rights group, remembered how French engineers rebuilt destroyed cities after World War II. Why couldn’t Blacks do the same thing in America? he wondered.

With that in mind, he set out to create Soul City, a new integrated community whose main goal would be to help Black people. “Millions of poor Black southerners had moved north in search of a better life only to find disappointment, McKissick [said]. Why not provide them with jobs and a decent place to live right where they were, in the South?”

For 11 years, with uncertain support from government, industry, and a host of experts, McKissick struggled to create his dream city. With borrowed money, he bought 5,000 acres of desolate land in the “economic wasteland” Warren County, N.C.—an hour away from Durham, on a former slave plantation once owned by William Duke—that lacked water, sewers, roads, and an electrical grid. It was simply an idea for a city, one without infrastructure, to be built by a man with no experience in city building, who expected investors to place “faith” in him.

When announced in 1969, Soul City was projected to have 50,000 residents within three decades. They would live in a collection of villages with a town center, an industrial park, and a network of parks and open spaces. Streets would be named after Nat Turner, John Brown, Dred Scott, and other Black figures.

In this sympathetic, deeply researched, and heartbreaking account, Healy, a professor at Seton Hall Law School and author of The Great Dissent, details the innumerable obstacles that blocked the way for a bold venture in racial equality.

From the start, Soul City was viewed widely as “an experiment in Black nationalism,” writes the author. Although intended to foster economic equality, not separation, the venture sounded Black, if only because of its name, which McKissick refused to change, despite many pleas by government and industry officials. In return for a $14 million federal loan guarantee, McKissick agreed to become the chief Black spokesman for President Richard Nixon. But despite careful planning, McKissick and his small staff hadn’t fully considered the challenges, overlooking key aspects like water supply and city design, writes Healy.

At its peak, the city consisted of one completed neighborhood, with most workers and residents living in trailers.

The Raleigh News and Observer, initially skeptical, would eventually publish a dozen exposes and argue against Soul City (“There is no industry there, no shops, no houses—no Soul City.”) The paper’s editorial director, Claude Sitton, much admired by civil rights activists, dismissed the ambitious project as a “separatist venture.” North Carolina Senator Jesse Helms announced, “I’m going to kill Soul City.”

In fact, says the author, “a lot had been accomplished,” given the context of endless federal bureaucracy, uncertain commitments by industry, and constant attacks from opponents.

Aside from its name—off-putting to many—Soul City lacked everything from sewage treatment to amenities, which made it unattractive to companies that otherwise seemed prepared to open plants there. In the end, the U.S. Department of Housing and Urban Development, then a big proponent of new cities, pulled the plug on millions of dollars in loan guarantees, declaring Soul City “no longer a financially viable risk.”

About 200 people now live in what’s left of Soul City. In 1997, North Carolina built a medium security prison there. An inmate-staffed soap factory nearby produces $6.5 million annually for the state.