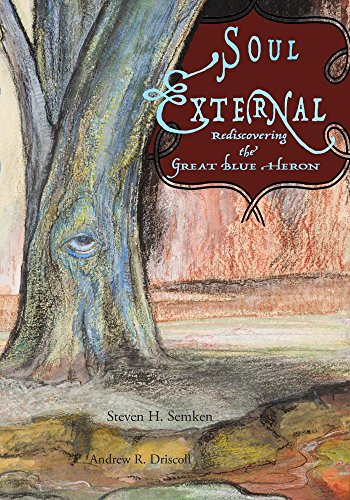 “This is an artful, idiosyncratic book.”

Soul External is a curious book. Not only because it is quirky but because it is inquiring. A mixture of nature writing, mythology, and essay, with the occasionally shaggy dog story thrown in, it recounts the narrator’s fascination with the great blue heron. In the process, it questions conventional assumptions about the role of humans in nature.

Using a reference to James George Frazer, author of The Golden Bough, as a springboard, the narrator explores the idea of a “soul external.” According to Frazer, a “primitive” man is able to remove his soul from his body and keep in in a safe spot, away from danger; moreover, there is also the possibility of leaving it externalized permanently.

This notion fires Semken’s imagination: “There is something startling and intriguing about this idea of a soul external, of the ability to place a soul outside the self somewhere in the wider world.”

Somewhere, in this case, is rural Kansas, at a rookery of great blue herons. This majestic bird is notoriously reclusive, and observing the great blue heron requires patience and resourcefulness, qualities which, as the narrative develops, are linked to larger ecological concerns and to the power of myths. Soul External takes a bird-watching obsession and transforms it into a quest

The book’s design plays an important role in this account. Andrew Driscoll’s illustrations complement the prose; they are colorful without straining to be “pretty;” sometimes they’re a bit moody. The text layout employs several fonts, using a conventional Garamond for easy reading of the main narration and a recondite, squiggly Chancery Cursive for the many citations. Soul External displays an impressive breadth of reading, compiling quotations from antiquity to the present that inform the author’s vision.

As for the blue herons themselves, Semken is a keen observer. He records their surroundings, their habits, their sounds: an “eerie variety of noises: clacking, squalling and barking . . .”.

But he is also a playful fabulist, moving freely between realistic convention and a more fanciful mode. He claims to recognize the odor of the heron’s breath, which is redolent of “thick, green moss on the shady side of tree bark, an unctuous aroma additionally spiced with the pungency of worm casings and piles of dew-soaked cedar shavings and a pinch of chanterelle mushroom.”

This is a peculiar kind of connoisseurship. Early in the book, allusions to the “alchemical” or “magic” made me nervous that the story might get bogged down and become some kind of New Age tract. But the narrator acknowledges the risks of “psycho-spiritual hogwash” and pursues a different kind of journey. This quest involves the discovery of an obscure work by a certain Dr. Horatio Flatstone of a now-defunct university, and puts him on the trail of a local natural history expert named Fillmore Grin, whose Wild Testament is kept in the hollow of a large-trunked sycamore tree.

It’s an amusing shaggy dog story, full of gnomic utterances and Poor Richard insights. Although a serious ecological argument is palpable, Semken doesn’t lose sight of the necessity of entertaining the reader. He’s not afraid of a joke.

And where, in the end, do all these strands lead? Clearly Soul External is concerned with the myths and stories we tell ourselves to make sense of our place in nature. But the book is not reducible to a slogan or a political program. Significantly, the narrator sees his relationship with the rookery in light of Keats’ notion of “negative capability,” which will accommodate doubts or uncertainties and may also be nourished by them. It is part of a project to discover a “now forgotten language.”

Although I am wary of a romantic nostalgia to which some “green” writers are susceptible, I think Semken is onto something. His emphasis on language recalls Gary Snyder’s insistence that consciousness and language are as “wild” as anything else that might be observed in nature. What gets called human culture (with its powers of storytelling and myth-making) isn’t somehow alienating; it doesn’t set humans apart from nature or create an “Us” and “It” dichotomy. Rather, language is deeply embedded in nature, and is simply an attribute of our species, like our opposable thumbs.

Soul External dramatizes this situation, while reminding the reader that our handling of natural processes involves choices. Semken avoids didacticism but he implies that the neverending challenge for humans is to do a better job with their capacities. We might find ways to build ourselves a better bird’s nest, so to speak.

This is an artful, idiosyncratic book. Paradoxically, its indifference to fashion makes it timely, as many readers yearn for a transition to a post-consumerist age.