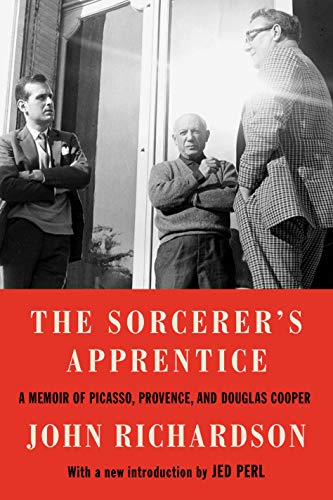 “Line after line and scene after scene delight the reader with its account of a world gone by but well worth the returning to, if only as a tourist. The Sorcerer’s Apprentice has many rabbits in its hat, much magic in the scarves and interlocking rings.”

John Richardson, who died in March of 2019 at the age of 95, has been reborn. In literary terms this means his work is reissued and—though never out of print—The Sorcerer’s Apprentice comes to us anew.

Best known as the author of a magisterial multi-volume biography of Pablo Picasso, Richardson has also written books on Edouard Manet and Georges Braque. As another of his titles suggests, he seems to have consorted with almost every major figure in the modernist movement: Sacred Monsters, Sacret Masters: Beaton, Capote, Dali, Picasso, Freud, Warhol, and More. On one level, these books are campy gossip; on another they provide acute analysis of artists at work and play.

That title Sacred Monsters sets the tone, as well, for The Sorcerer’s Apprentice. With its subtitle: Picasso, Provence, and Douglas Cooper, this book invades the privacy of public figures with unflagging relish.

Richardson was of “mixed” parentage—his father an aristocrat and successful businessman, his mother a secretary who married her much-older boss. The resulting doubled perspective on society—together with an acid-imbued tongue—serves the writer well. As he puts it, his “upstairs-downstairs background has proved, if anything, an advantage. I like to think it has enabled me to see things simultaneously from very different angles, like a cubist painter, and arrive at sharper, more ironical perceptions.”

Sharp ironies abound. The writer manages to convey both modesty and arrogance, both a reverence for the genius of Picasso and a snippy irritation with the double-dealers and art dealers and romantic partners in the great man’s circle. The Sorcerer’s Apprentice is lavishly illustrated, and its chapter-titles set the scene. Here are a few: First Night; Grand Tour; Miscreants, Pets, and Neighbors; The Visitors Book; God Save the Queen; The Beginning of the End; The End. Richardson’s prose is lambent and precise, his opinions cutting-edged. This is a tell-all memoir, and there’s a lot to tell.

Jed Perl, in his introduction to the reissued volume, puts it accurately: “In Richardson’s pages Picasso emerges, if not exactly as our contemporary, then certainly as a man we see clearly, warts and all, his contradictions and complexities presented with a sympathy that is somehow both dispassionate and impassioned.”

Provence, too, is a landscape the author knew for years, he and his lover, Douglas Cooper, remodeled and enlivened an 18th century colonnaded folly, Chateau de Castille, and made of it a central player on the stage of modern art. His account of drilling for water, of truffle hounds and peasants and high society in and around Uzès—now fashionable, then derelict—makes for a moveable feast.

It must be acknowledged, however, that the banquet requires a rarified taste. Here’s a representative portrait: “Marie-Laure was one of the most paradoxical women I ever met: spoiled, generous, sly, fearless, manipulative, impetuous, bitchy, affectionate, childish, maddening, and, not least, extremely cultivated . . . Early in their marriage, Marie-Laure  had caught the Viconte (as she always referred to him) in the arms of his gym instructor. She never reproached him; she simply told most of their friends.”

Douglas Cooper, as the memoir’s subtitle suggests, provides a focal point. The on-and-off affair between these two young then aging connoisseurs is central to the book. “There was something that the fairy tale failed to reveal, however: the moment the kisses cool, the Prince turns back into a toad or, in Douglas’s case, a bad, bad baby, who requires a lot more affection to be cured of his tantrums. The tension was often excruciating, but the Tolstoyan bond that developed between us—a bond forged out of a passionately shared experience of works of art—made it all worthwhile.”

Cooper, the son of a rich investor in Australia, lost an eye in a car accident but perhaps not coincidentally became a major student of then-contemporary art. Of the four principal exemplars of Cubism “in Douglas’s cubist pantheon”—Picasso, Braque, Leger, and Gris—only Gris was not alive, and Cooper courted the others turn by turn, becoming an important collector.

Of his introduction to Picassso by Cooper, Richardson writes: “What surprised me was Picasso’s smallness and delicacy, also the unassuming courtesy—those radiant smiles—with which he greeted people, who seldom had a language or anything else in common with him and seemed only to want to waste his time.”  Soon enough he comes to understand, “However, as I later discovered, Picasso had as many ways of saying yes while meaning no as a Japanese. ‘I’ll do my very best,’ or ‘I’ll be in touch,’ usually implied the opposite.”

Those polite oppositions run through the book. Cooper was a serious scholar with a discriminating eye; he was also an ill-tempered fop. His disdain for others in the trade was equaled only by his willingness to take advantage of them. Buried, but not deeply, are the tales of those who conspired with Goering and the Nazis or lost their fortunes to gambling or drugs or frittered their talent away. The portraits of Graham Sutherland, Francis Bacon and others are vivid, as is Richardson’s accounting of “The Tate Affair”—in which Cooper and the Tate Gallery Director, John Rothenstein, came to quite literal blows.

Always, the author offers genealogies and titles of his extensive list of friends, and though it seldom feels like name-dropping the list grows over-long. “Her mother was the daughter of the Comtesse de Chevigné . . . and the great-great-granddaughter of the Marquis de Sade. Marie-Laure had originally contemplated marrying Jean Cocteau, but Proust supposedly suggested that the Vicomte de Noailles would be more suitable.”

Still, the overarching narrative here tells of a wide-eyed boy whose vision is transformed by what he sees. His report on watching Picasso or Braque at work is never less than instructive, and his perceptions are keen. Line after line and scene after scene delight the reader with its account of a world gone by but well worth the returning to, if only as a tourist. The Sorcerer’s Apprentice has many rabbits in its hat, much magic in the scarves and interlocking rings. This reader fell under its spell.