The Sons of Philo Gaines 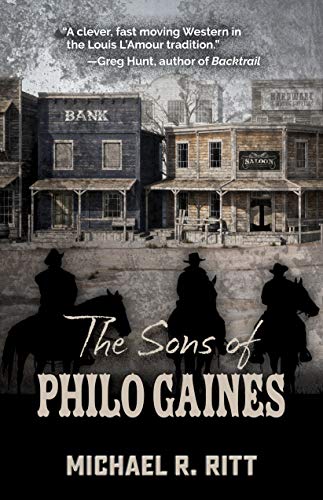 “The quality and clarity of Ritt's writing and delivery are truly superb. Readers will feel like they're watching a movie.”

Surely author Michael R. Ritt is on his way to being a bright new star in the American West literary world. His charming, well composed, intelligent story telling accomplishes what many Westerns fail to do—that is, bring the reader thrilling, realistic, easy to read adventure devoid of the usual Old West bromides. His narrative flows effortlessly, his descriptions of setting are detailed without being long-winded, his depiction of people is succinct, acutely authentic, and familiar.

Fans of Western novels will thoroughly enjoy The Sons of Philo Gaines, a story of land and gold, the coinage of the American West. Men lied and cheated for it. Hungered and murdered for it. In the Old West, land and gold were more valuable than life itself. The other guy's life, that is.

This outstanding debut is jam packed with everything fans of American West literature could want:  gunfights, fist fights, stage coach bandits, a hostile Indian raid, lawmen on the take, a damsel that needs saving from a flim-flam swindler.

"Anger flooded over Matt, and he felt his ears grow hot.  Before he realized it, his right arm shot out with a quick jab that landed a punch right on Tolliver's mouth."

His brother, Luke Gaines: He sometimes goes by the name of Luke Jensen. In New Mexico Territory, he's hired to deliver a mysterious package to Amos Tolliver, an influential but not entirely honest man in Mustang Flats. Right off, Luke sees that he's being followed by two gunmen and manages to lose them early on. They catch up to him later, but it goes bad for everyone when Indian warriors show up. Luke outsmarts them all, and when he finally arrives in Mustang Flats and delivers the package, he's hired on the spot to kill his brother Matt.

". . . 'I'll give it to you straight, Luke. I want you to kill him for me. Goad him into some kind of argument and then kill him. The law in town is on my payroll, so, if you make it look like a fair fight, you won't have anything to worry about. . . .'"

If there's one thing Luke can't stand, it's crooked lawyers and crooked lawmen.

And then there's brother David Gaines, a gambler with a wallet full of winnings and an emergency hundred dollar bill in his bowler hat. A good-hearted con man, he will reluctantly use his guns, but he's as smooth a talker as his other two brothers. Conversations save his backside when his fists are useless, so he's careful to calculate his odds in life as well as in cards.

". . . what we refer to as 'chance' is nothing more than an accumulation of any number of variables that are in play to affect an outcome. If a player manipulates the cards, as I have done, then that would be cheating. But there are many other variables that can influence the outcome of a game . . .

"Such as the knowledge of the odds . . . I know that in five-card stud, the odds are one in six hundred and ninety-three that you will draw a full house. I also know there are thirty-six different possibilities for a straight flush."

David is hired to ride shotgun on a Wells Fargo stage that's being threatened by a skinny bow-legged old gent in his sixties riding a woebegone mule. The Wells Fargo agent doesn't want David to shoot the old guy. He wants David to talk him out of it.

And who is the patriarch that produced these fine men? A war hero father.

Philo Gaines was a well-known fur trapper and mountain man. He'd lived with and fought with the Indians and in 1846 had served as a scout under General Zachary Taylor in the war with Mexico. The discovery of gold in California kept Philo occupied with more scouting for the army. After that, he served as a colonel in a division of Confederate cavalry from Tennessee. He was wounded twice, then after the war, Philo was appointed to the U. S. Senate.

Ritt does a tremendous job of portraying continuous action and intrigue from the first page to the last—not all of it guns ablaze, much of it brainy—without falling back on trite, worn out phraseology. The quality and clarity of Ritt's writing and delivery are truly superb. Readers will feel like they're watching a movie.