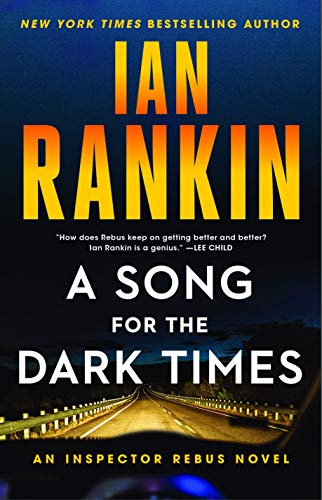 John Rebus has been retired from the Scottish Police for a while, but something keeps pulling him back in. In this case, it’s a summons from his estranged daughter, Samantha, whose husband has gone missing in the north of Scotland. In a moment, Rebus abandons his new flat and leaves his dog in the care of a colleague in order to make the long journey north.

The murder of a young playboy near Edinburgh preoccupies Rebus’ protege, the enterprising and intelligent Siobhan Clarke, while Rebus relocates for his investigation to the tiny village of Naver. Readers of this series will miss Rankin’s usual atmospheric portrayal of Edinburgh, especially since there isn’t much description of the northern landscape. Once Rebus’s old nemesis, Edinburgh crime lord Morris Cafferty, appears, however, the plot tightens as the tentacles of crime link north and south, country and city.

Samantha’s husband is eventually found dead not far from the commune where Samantha had recently taken a lover, Jess Hawkins. Everyone in the commune, which seems to hide people with criminal histories as well as louche aristocrats, becomes a suspect.

Rebus quickly unmasks Hawkins’ rhetoric of freedom as a thin cover for exploitation both of women and of the very nature of community. In that way, the seemingly non-materialistic residents of the commune resemble the hedonistic aristocrats at the center of Clarke’s investigation in Edinburgh. Indeed, links between the Edinburgh and Naver cases grow clearer as the book progresses.

Rebus discovers a truer community than the supposedly familial commune amid the isolated villagers of Naver, each of whom unselfishly aids Rebus in his investigation. They include May Collins, a barkeep who is a potential love interest; Mick Sanderson, who fixes Rebus’s broken-down Saab for nothing; and Julie Harris, a compassionate neighbor of Samantha’s who cares for her daughter, Carrie, when Samantha retreats to the commune after her husband’s death.

Rebus pursues a seemingly desultory investigation despite being warned off by the acerbic local investigator, Detective Creasey. While the local police act in ways that are insensitive to the villagers and especially to Samantha, Rebus once again demonstrates the melancholy obsessions and sharp observations that make him an excellent detective but neglectful father.

The scenes between Rebus and his daughter ring true with frustrated love and long-time hurt. His young granddaughter is realistically portrayed as a child trying to process and overcome trauma, gripped by storms of emotion but calmed by loving attention.

The plot touches both on current affairs, especially the voracious grip of real estate developers, and history. The most fascinating site in the book is Camp 1033, a POW camp in England in World War II. As Rankin notes in the acknowledgements, “Those who know the area around Tongue will realise that I have taken several liberties. There is no village of Naver, nor does Camp 1033 exist, though other camps mentioned are real, as are some of the incidents recounted.” Rebus interviews German-born survivors of Camp 1033 who intermarried with Scottish people after the war about their ambivalent views of their experiences at the camp. In the process, Rankin addresses what defines nationality and family.

Family is at the center of this book. In this case, Rebus’s potential reconciliation with his daughter and granddaughter hinges on his ability to solve the crime. As a man whose love relationships and connection to life in general seem tenuous and temporary, Rebus finds in the stony soil of the north a place to cultivate both his inner life and his connections to others. In that regard, he takes seriously the admonition of Jess Hawkins: “We’re all looking for answers in our different ways. You were a policeman. You looked out when you should have been looking in.”

In this book, we see Rebus’s vulnerability as well as his strength. Rankin portrays the physical weaknesses and tormenting conscience of a man in his sixties sensitively, making this detective story a study of aging as well as morality. The book’s closing lines symbolically express the perspective of a man facing old age: “It was still light outside. This time of the year, it was hard to imagine the many long dark nights that would arrive all too soon. . . .”