A Song of Comfortable Chairs: No. 1 Ladies' Detective Agency (23) 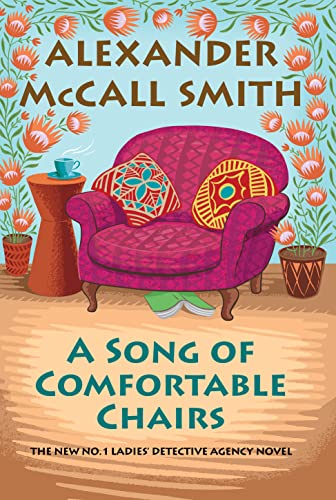 “McCall Smith is an author who sees his characters and their world, fully and tenderly. And that makes for a book that is as comforting to sink into as well-worn armchair.”

A Song of Comfortable Chairs is aptly titled: reading the book is like sinking into an overstuffed chair, allowing oneself to relax and allow time to slow down. This is a story in no rush to be told. There are many asides, thoughts, impressions, all of which give flavor to the book, evoking a distinctive world. There’s no dramatic pacing, no staccato rhythm to the prose propelling the reader forward. Instead there’s a simple and complete appreciation for the characters and the world they inhabit.

This is a typical passage, rich in reflection:

“There were tall people, and then there were some very short people, although sometimes they did not stand out so much as the tall ones, and you could easily miss them. But they were there, just as all the other sorts of people were there. The real art in going through life with dignity and with a modicum of happiness was to accept what you were, and, at the same time, to accept others—and to love them all equally. That was hard, and for some people it was impossible, but you had to try.”

Although this is a book about a detective agency and the work the two lady detectives do, it’s not a traditional mystery novel. There is no crime, no case that needs to be solved. Instead there are problems. One is a business issue, the other personal, but neither rise to the status of a crime. Neither is particularly fraught or tense. Rather, they are problems that matter deeply to the people involved, and because the lady detectives are kind and compassionate, they decide to take on these problems as if they were their own. Their solutions are clever and fun, fitting in well with the lead detective, Mma Ramostwe’s, personality. As she says, “Talking about something is the first step in fixing it.” This is a book with much wonderful dialogue and a lot of kindness in the approach to “fixing” things.

Besides Mma Ramotswe and her fellow detective, Mma Makutsi, Botswana itself is a main character in the story. McCall does a beautiful job of threading the features of this very particular place throughout the book. From the color of the sky to mentions of “traditional” bodies (meaning more fully padded rather than less) to descriptions of lion behavior, Botswana, and in particular Gaborone, the capitol of the country and the home to the agency, comes vividly to life. There are lovely details about social customs that are used to illuminate the story:

It was the oldest and simplest of African greetings: I see you. It implied so much more than it said, though, because it meant that Mma Ramotswe saw not only the person standing before her, but all that lay behind her—who she was, where she came from, how she felt.”

McCall Smith is an author who sees his characters and their world, fully and tenderly. And that makes for a book that is as comforting to sink into as well-worn armchair.