Something Rich and Strange: Selected Stories 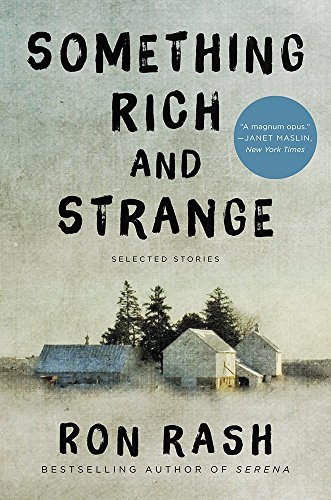 Ron Rash is often billed as a “Southern” or an “Appalachian” writer, and it’s true that he writes from the heart of a place and its people, but this should not confine him, any more than Faulkner is confined by Mississippi or Hemingway by Upper Michigan. It’s not a box, then, but an open window into his work and world. True, he chooses to live in Western North Carolina where he grew up and now works, teaching at Western Carolina University, but he is very much a contemporary American writer.

He is a the author of five prizewinning novels, including Serena and One Foot in Eden, and four collections of poetry as well as five collections of stories, among them Burning Bright, Nothing Gold Can Stay, and Chemistry and Other Stories. This opus collection of his short fiction (his favorite form) is drawn from all of the short fiction.

He brings his poet’s eyes to the images of his people and place and his native ears to the language of that locale. One of the best tales, “Into the Gorge” opens with his description: “His great-aunt had been born on this land, lived on it eight decades, and knew it as well as she knew her husband and children. That was what she’d always claimed, and could tell you to the week when the first dogwood blossom would brighten the ridge, the first blackberry darken and swell enough to harvest.” This story moves from the aunt’s demise in the woods to a simple yet wild story of Jesse’s misfortune when hunting ginseng. It is one of the most plotted of his stories and one of the most troubling.

Typically, Ron Rash writes what we might term slice-of-life fiction, where the story seems to happen with the same absence of form as life itself. He has declared that he locates character and place and then tries to stay out of the way of the story. And so they often end as they start in the middle of circumstance. But the characters, the dialogue, and the images are so vivid they hold you close. It’s like stopping in a local dinner, sipping your coffee, and overhearing the talk and watching the faces of those sitting in the next booth.

The time frame ranges from depression times up to the most modern. “Hard Times” opens with Jacob and Edna on their farm surrounded by the poverty of neighbors. It’s a beautiful story and one of the most tender.

“Back of Beyond” leads us into a contemporary Appalachian town consumed by the use and abuse of methadone. But don’t expect themes or stances from Rash. There is suspense and there are moments of understanding, but he is there to record—what is seen and what is missed.