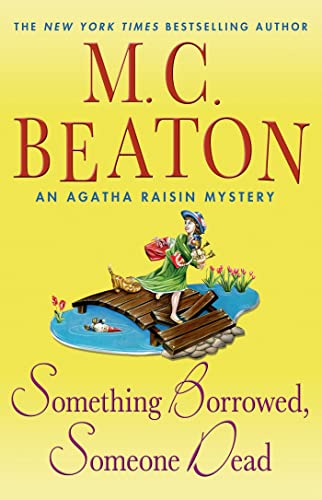 Agatha is the ultimate outsider/insider; she retired to Carsley, a cozy village in the Cotswolds from a big PR firm in London. There aggressiveness was an asset, here mildness is valued. After her nosiness solved a couple dozen village murders, Agatha stumbles upon a new a career: she now runs a detective agency.

Agatha may be a wiz at divining other people’s motives, but she doesn’t spend time looking in the mirror, so in her private life she makes the same mistakes (mostly romantic) over and over.

Agatha’s great secret—she was born in a Birmingham slum—drives her to succeed. She wants to mentor (a word Agatha would scorn) her good-looking young apprentice Toni who has a bad habit of falling for older men. But Agatha’s attempts to save Toni from heartbreak always come off as interference.

Not great for Agatha, but the reader giggles madly at what we know is coming.

In this adventure, Agatha pokes into the murder of Gloria French. When the widow first moved into Piddlebury, she was welcomed. She’s a do-gooder—raising funds for the church, shopping for the elderly and reading books to the blind—a heaven sent addition to any village.

When she is murdered, Parish councillor Jerry Tarrant, fearing that his tranquil village is falling apart because the villagers look accusingly at each other, hires Agatha.

Agatha soon ferrets out the truth about Gloria: her habit of “borrowing” items and not returning them has touched just about everybody in Piddlebury. It’s not grand larceny, merely a teapot and some silverware, but when people ask for their items back, Gloria either flat out denies she took them or blames the victim for the misunderstanding.

It’s the kind of crime that can really get under one’s skin, so when Gloria is poisoned by a bottle of homemade elderberry wine, not a lot of tears flow.

But as villagers are wont to do, they draw inward and resent Agatha's bullying methods of investigation. They decide the culprit is an outsider who passed through. Now there’s nothing to fear.

Savvy, smart, and shrewd Agatha understands the outsider theory and knows it is hogwash.She questions everyone, waits and questions again—and then again. Her visage may resemble a bear with her searching small dark eyes, but she has the tenacity of a bulldog.

M. C. Beaton is often described as the “queen of cozies.” But she plays fast and loose with the accepted confines of that genre. Her body count is always quite high, and an investigation can take months. Her detective worries about an aching hip, her sex appeal, and hair color—not very Miss Marple like.

Agatha is easy to understand and a joy to read about.

Long may she interfere.