Someday This Will Be Funny 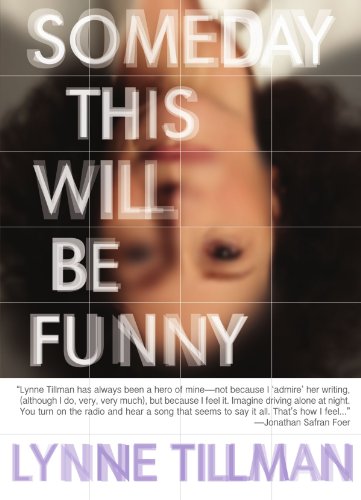 If author Lynne Tillman were writing recipes and not short fiction, she no doubt would insist that all ingredients be fresh, crisp, and organic—because her short stories are of the sort that seem very much of-the-moment, as if they were just harvested from the fertile fields of her imagination. Indeed, in some cases, the stories seem of the “I just thought of that” sort, some more fragments than stories. Others not stories at all, but, like “Lunacies,” more tricks of language than short fiction. “Lunacies” runs scattershot across the page, mixing information about the moon (“The tidal forces of the Moon—and the sun—don’t act only on the oceans, they act on the land too. Stand on the equator, and the land beneath you will rise and fall as much as twenty-one inches over the course of twenty-four hours.”) with the broad-stroked tale of “He” and “She”:

“Their honeymoon, after years of living together, still scared up traditional illusions, intimations of ecstasy, a time out of reality, and when the second night of connubial bliss yawned on, she quoted George Meredith, ‘Where may these lunatics have gone to send the Moon.’”

“Lunatics” reaches no conclusion and simply ends, instead of reaching an ending. Indeed, the work collected here is something of a hit or miss, with some tales, like “The Way We Are,” feeling fully fleshed out in three short pages, with others, like “But There’s a Family Resemblance,” feeling fragmented in three times the space. Indeed, “Resemblance” seems at times more polemic than story, as when Ms. Tillmann—a noted cultural critic as well as a writer of fiction—issues her opinions of reality TV:

“In the 1970s, the Loud family fascinated Americans with its psychological honesty, so compared with it, today’s reality TV is a joke; it trivializes whatever reality you’re interested in. The Louds fell apart afterward. TV’s exhibitionists challenge credulity, sanity, yet people humiliate and shame themselves daily. Americans can’t shake their Puritan past, so everyone’s hoping to confess their sins and find God’s grace. Still, it’s hard to understand Judge Judy’s appeal to the characters who want to be judged on TV, and those who watch manifest people’s perverse, insatiable curiosity and schadenfreude. Also, some people miss being yelled at as they were in their families. I’m one of them.

“Shame is different from thirty years ago, it doesn’t last as long—Pee-Wee Herman, Martha Stewart, Richard Nixon—they bounced back, and, like history, Americans forget their pasts and sins quickly. Americans have several acts, with shame’s mutation, and if they’re being televisual, it helps; if they’re not, some can escape the stigma of being ‘ugly as sin’ with plastic surgery—see Paula Jones and Linda Tripp. ‘Ugly as sin’ is bad, it’s evil—remember what the bad guys in movies look like.”

The above, while it points to many truths of our present society and media, many of which have been pointed out repeatedly before, adds nothing whatsoever to the story of Great Uncle Charley and the secret that was uncovered after his death. It is a cul de sac of a commentary, one that loops in on itself, but ultimately takes you nowhere.

And yet there is much to praise in Someday This Will Be Funny, as in all of Lynne Tillman’s books. Her continued need to tinker with the substance of the short story makes for enjoyable reading, if the reader is willing to accept that, within the covers of any of her books will be a full range of levels of success. But what always works in Ms. Tillman’s favor is her use of language, her turn of phrase, and her own natural sense of muted outrage that seems to be sort of her emotional default setting. Given that Ms. Tillman blends her anger with an acrid wit, the combination often yields combustible results.

Such is the case with “Madame Realism’s Conscience,” which is certainly the most enjoyable story in this volume, if not the most fully realized. Opening with a quote from Groucho Marx (“Whatever it is, I’m against it.”), “Madame Realism” lets loose with a stream of consciousness consideration of history, politics and power. Consider:

“Over the years, Madame Realism had heard many president rumors, some of which were confirmed by historians: Eisenhower had a mistress; Mamie was a drunk; Lincoln suffered from melancholia; Mary Lincoln attended séances; Roosevelt’s mistress, not Eleanor, was by his side when he died; Eleanor was a lesbian; Kennedy, a satyr; Jimmy Carter, arrogant; Nancy Reagan made sure that Ronnie, after being shot, took daily naps. When Betty Ford went public with her addictions and breast cancer, she became a hero, but Gerald Ford will be remembered primarily for what he didn’t do or say. He didn’t put Nixon on trial; and, he denied even a whiff of pressure on him to pardon the disgraced president. Ford’s secrets have died with him, but maybe Betty knows.”

Along with Madame Realism, throughout the 21 tales gathered here, dance presidents and popes, Clarence Thomas and Marvin Gaye and John Lennon, and a host of the irritated, unsettled, and chronically perplexed characters that are Ms. Tillman’s métier. Admirers of her earlier work will find much to enjoy here, as will those who lay claim to the wide expanse of what may be called “modern fiction.” Others may at times feel the need of a map and a flashlight to find their way along.