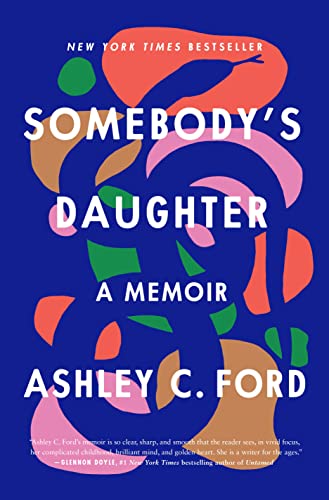 “Armed with the insight and lessons from her youth, the author emerged as a bright young college student who learned to love herself for who she was and who she has yet to become.”

“Why God in heaven gave you to me, only he knows. I do not deserve to have you as my daughter but God gave you to me for a reason, and I am so grateful to be your father. Please! Please! Forgive me for all the pain I caused you in your life.”

The quote above is but a small excerpt at the very beginning of Somebody’s Daughter written to author Ashley C. Ford from her father. At the time of its writing, he had served 20 years in prison for rape. The placement of the letter as the opening of the book indicates the import of the relationship between father and daughter.

Ashley had loved him from afar all those years, and much of her life had been spent trying to reconcile his life with hers. One clear example of how she felt about her dad is the following succinct statement: “My father had been in prison for so long, I believed every good thing about me had come from him and him alone. I couldn’t imagine how much better I’d be if he were around.” Additionally, she explains, “My desire for a physical representation of my father’s love led me to pursuing parental relationships with all kinds of authority figures I came into contact with.”

Most psychologists believe that a healthy adulthood is based on the accumulation of positive experiences during our formative years and the significance of nurturing family interactions.  Children whose early years are fraught with emotional distress and uncertainties have a more difficult time maneuvering a well-balanced life trajectory.

Author Ashely Ford’s memoir is a foray into a familial journey, i.e. an in-depth examination of characters and family dynamics that commonly reside within the American landscape. Though they may not be totally unique, the personalities are nonetheless still relatable as she brings them alive in a compelling narrative. The dialogue among family members is often dispiriting and yet poignant at the same time.

Ashley’s mother, for instance, was often vituperative in her demeanor and the unpredictability of her moods was very unsettling. Ashley deftly lays bare her mother’s mood shifts by stating, “My mother’s rage drained the light from her eyes and she became unrecognizable to me. There was Mama, the loving mother we knew before whatever sparked her ire, and then there was Mother who showed up in her place.”

Ashley’s Grandma Billie was undoubtedly her best adult friend. As she describes her feelings while she was near her, she explains, “Something about my grandmother’s room made me feel protected, and so, it was the only place I didn’t mind being alone. Instead of feeling closed in by the silence, I felt expanded by it. When I turned out the light, nobody guessed I was in there telling myself stories, building safe places to go inside my head.”

In contrast to the safety she felt in her grandmother’s presence, Ashley learned early on not to trust males. Her mother began to instill fear in her as a means of self-protection. And her grandfather tried to teach her the same principle.

In speaking about her grandfather, Ashely states, “Grandpa didn’t have to tell me not to trust boys. I already knew I couldn’t. And men. Especially men. At that point in my life, Grandpa was one of the only adult men who didn’t make me nervous. Even my uncles, who had never done or said anything to make me question them, caused me to feel nauseous at the thought of being alone in a room with them.” Ashley, knew that “protecting my body became my number one goal.”

In spite of her difficult environment at home, Ashley bloomed and grew both physically and psychologically. She excelled in her studies, and like the proverbial Phoenix, she rose from the ashes.

Armed with the insight and lessons from her youth, the author emerged as a bright young college student who learned to love herself for who she was and who she has yet to become. Somebody’s Daughter: A Memoir is one of the most positive outcomes of Ms. Ford’s dedication to becoming a healthy adult.