Some Writer!: The Story of E. B. White 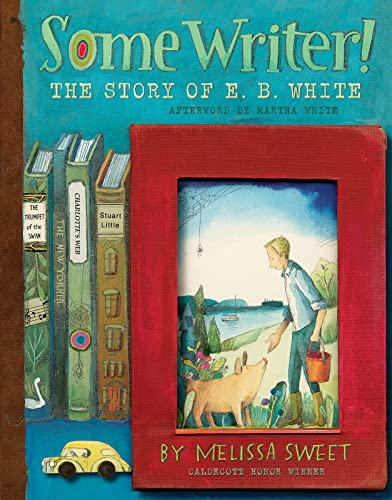 “I want to buy a copy.” “It’s beautiful.” “I love it.” These are direct quotes from book club members who saw an advanced copy of Melissa Sweet’s latest biography for young readers, Some Writer: The Story of E. B. White. In her award winning, scrapbooking, collage style, Sweet has created a visually arresting volume that introduces readers to the man who wrote one of the all-time favorite children’s books, Charlotte’s Web.

Sweet’s illustrations are superb. If White’s famous spider character Charlotte were to weave a web for Sweet, it would say, “Some Illustrator!”

In the author’s note, Sweet writes, “I set out to capture two things as I began the art for this book: the sense of place in White’s writing and the small, vivid details he describes.” With sepia tones that evoke an earlier age and White quotes distinguished by the distinctive impress of a manual typewriter, readers do indeed experience a sense of time and place as well as charming, unexpected details from White’s life.

Study an illustration, and you’ll notice a vintage box of paper clips, an old-fashioned folding yardstick, or a sere and withered leaf. Reproductions of original letters, manuscripts, and photographs from the White family albums complete the time journey, helping to submerge readers in White’s life, including the people, places, and things that were important to him.

Although best known today for his novels for children, White didn’t begin writing for this younger audience until he was in his 40s. His first, Stuart Little, was published in 1945. It was seven years later before Charlotte’s Web was released in 1952, although he had completed the manuscript a year earlier. He wrote to his editor in 1951 saying, “I've recently finished another children's book, but have put it away to ripen (let the body heat out of it). It doesn't satisfy me the way it is and I think eventually I shall rewrite it pretty much." It was 18 years after that, in 1970, that White published his last children’s book, The Trumpet of the Swan.

For most of his career, beginning in 1926, E. B. White was a writer and contributing editor for the New Yorker magazine. Among his colleagues during those heady, early years of the magazine was James Thurber. They collaborated on the humorous 1929 book Is Sex Necessary? Or, Why You Feel the Way You Do. Many years later he revised his Cornell University English professor’s classic book, The Elements of Style by William Strunk, Jr. Today it is commonly known as Strunk and White’s Elements of Style, and it is a book that continues to influence and inspire writers.

As is often true with writing that appears effortless, White labored over his essays and stories, writing and rewriting until he was satisfied that it was just right. In the case of Charlotte’s Web, he struggled for months the find the perfect opening sentence, trying and rejecting eight different beginnings before he hit on the perfect gripping first line: “Where’s Papa going with that ax?”

Frustrated, he put the story aside. A year later, he tried again, beginning with, “At midnight, John Arable pulled his boots on, lit a lantern, and walked out to the hoghouse.”

It still wasn’t right. At last, he cut straight to the action, writing, “‘Where’s Papa going with that hand axe?’ said Fern to her mother as they were setting the table for breakfast.”

He got it right! Afterward, he reflected, “I had as much trouble getting off the ground as the Wright brothers.”

Writing about White’s influence on her work, children’s book author and Newberry medalist Kate DiCamillo said, “The thing about White that comforts and fascinates me (and challenges me) is how he manages to make his words matter more. It is as if he’s able to make one word do the work of ten. He bears down with the whole of his heart and soul on each word he chooses.”

Clearly Some Writer! Is a labor of love, and like White, Sweet has put her heart and soul into each illustration and each word she writes to tell the story of the man who created Stuart Little, Charlotte, Templeton, Fern, and Wilbur. Readers both young and old are the beneficiaries.