Solzhenitsyn and American Culture: The Russian Soul in the West (The Center for Ethics and Culture Solzhenitsyn Series) 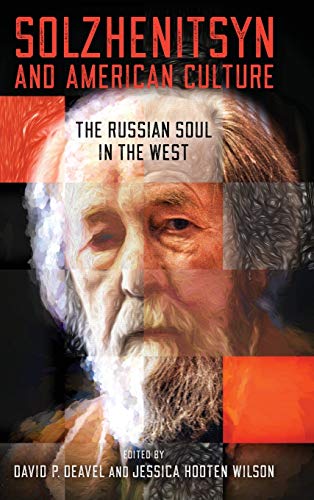 “Solzhenitsyn and the American Culture should serve as a reminder to those of us in the West that civilization is fragile, that democracy and liberty are forever under attack, that visions of earthly utopias are mirages of danger . . .”

After 70 years of Cold War with the Soviet Union and the ongoing political differences between Russia and the West, it would seem counterintuitive to publish a book about Russian cultural influences in the West. Yet the University of Notre Dame’s Center for Ethics and Culture (Solzhenitsyn Series), has gathered the writings of 20 scholars, many of who specialize in Russian culture, to show that at least in one cultural milieu—religious orthodoxy—Russia entered the American soul.

To be sure, the contributors to Solzhenitsyn and the American Culture mostly refrain from overstating their case. The great Russian novelists and writers, such as Dostoevsky, Tolstoy, Pushkin, Chekhov, Gogol, and Solzhenitsyn, culturally influenced only a select group of Western writers, and that influence was mostly in the distant past. Modernity in the West has for the most part rejected notions of sin, evil, and the spiritual growth that can result from suffering.

In their introductory essay, the editors argue that “the Russian experience should speak to Western readers,” and that “Russia’s deep roots of creativity and rich soul have yet more treasures whose influence would be beneficial” to the West today. Yet in much of the West, religion—especially orthodox Christianity—is rejected as too rigid, doctrinaire, intolerant, and judgmental. In a culture where “tolerance” is considered the greatest virtue, there is a limited appetite for Dostoevsky and Solzhenitsyn.

Solzhenitsyn, of course, for a time had tremendous political influence among Western conservatives and some liberals. The author of The Gulag Archipelago, One Day in the Life of Ivan Denisovich, The First Circle, and Cancer Ward revealed the rot at the core of the Soviet system and helped bring about its collapse. Gary Saul Morson’s essay on Solzhenitsyn’s “two cathedrals” (The Gulag Archipelago and The Red Wheel) and Daniel J. Mahoney’s essay on Gulag brilliantly make this point.

In those great books, Mahoney explains, Solzhenitsyn expressed a “moral and political vision [of] the nonnegotiable distinction between truth and falsehood.” He exposed the lies of communism and Western political modernity that human nature is perfectible and that human societies can be transformed into earthly utopias. Yet, unfortunately, those lies still command large followings in the West.

The West resisted Solzhenitsyn’s cultural and religious messages, as evidenced by the Western reaction to his Harvard commencement address in 1978 in which, William Jason Wallace writes, he “openly challenged the decadence of the West as a spiritual problem.” Western critics, Wallace notes, “labeled him a nationalist, a theocrat, an anti-Semite, and even a fascist.” Five years later in his Templeton Prize Address, Solzhenitsyn warned that unbounded freedom in the West has resulted in “more vehement . . . hatred” because “Men have forgotten God.”

All of Solzhenitsyn’s great works of literature have a religious impulse—good and evil are present in everyone; sin and suffering are commonplace among men and women—that has deep Russian roots in the works of Dostoevsky and others, as Ralph C. Wood points out in his essay. Dostoevsky, like Solzhenitsyn, suffered unjust imprisonment and personal loss. Both writers understood earthly tragedy and placed their ultimate hope, trust, and fulfillment in Christ and their orthodox faith.

Joseph Pearce, the author of Solzhenitsyn: A Soul in Exile, notes that Solzhenitsyn had “kindred spirits” in the West, including G. K. Chesterton, Hilaire Belloc, J. R. R. Tolkien, and T. S. Eliot. During an interview in 1998 with Pearce, Solzhenitsyn expressed his admiration for these writers and remarked that both Russia and the West suffer from “a belief in an eternal, an infinite progress which has practically become a religion.” He called this a “mistake . . . of the Enlightenment era.”

Other essays in the book show Russian cultural influences among African American writers such as Alain Locke in the 1920s, and later Richard Wright; the great southern Catholic writer Flannery O’Connor, who wrote powerfully about good and evil, sin and suffering; and American social activists Dorothy Day and Thomas Merton, both of whom, however, succumbed to the fruitless search for an earthly paradise.

Far too many Western intellectuals thought that the earthly paradise could be found in Soviet Russia and other communist states. “At the very essence of a utopia,” writes Eugene Vodolazkin, “is the idea of progressive movement toward a not-yet-achieved perfection.” History shows that when perfection is not reached, “[t]here comes a time when blood is spilled. Oceans of blood.”

“Relentless pursuit of the communist utopia,” Vodolazkin continues, “determined life in Russia for a large part of the last century at the cost of millions of lives.” He warns that in the 21st century, the quest for a “globalist utopia” has inspired “democratizing wars” and “color revolutions” that have produced more turmoil and tragedy.

The book’s concluding essay by Jacob Howland assesses Vasily Grossman’s Life and Fate, an unforgettable novel of life under Stalin that shows when “the world is ruled by abstract concepts of universal good,” it can produce “greater evil than evil itself.” Howland highlights a passage from Grossman’s book that he views as “a warning for our age of big data and digital surveillance.” This warning could not be timelier as today’s big tech companies and social media barons take it upon themselves to censor voices that oppose their agendas.

Solzhenitsyn and the American Culture should serve as a reminder to those of us in the West that civilization is fragile, that democracy and liberty are forever under attack, that visions of earthly utopias are mirages of danger, and that, in Solzhenitsyn’s words, “the line separating good and evil passes not through states, nor between classes, nor between political parties either—but right through every human heart—and through all human hearts.”