A Solitude of Wolverines: A Novel of Suspense (Alex Carter Series) 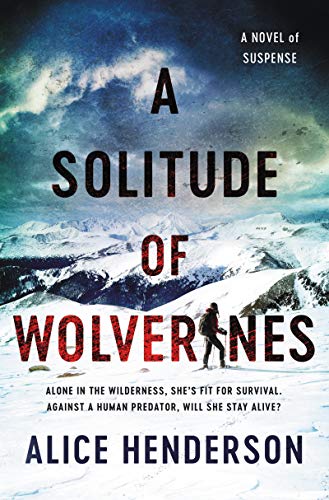 A peaceful but passionate scientist, Alex turns into a warrior when the wilderness and its denizens are threatened by humans. Her specialized knowledge and skills equip her for both roles.

She has full education and training for field research; in this case, a wolverine population study. She knows the requirements for backcountry travel and survival, as well as how to think on her feet to escape perilous surprises. And if ever directly menaced, she’s got martial arts skills—and bear spray.

All come into play during her project for the Land Trust for Wildlife Conservation. This organization received a donation of a defunct ski resort in the Montana Rockies, along with its adjacent private property, forming a 20,000-acre preserve. Alex, hired to replace the original biologist who had to leave in a hurry, has this wild paradise all to herself from autumn through winter. She resides in the old ski lodge, with free use of the furnishings, equipment, and vehicles left behind.

She doesn’t help her cause by getting in people’s faces. After barely meeting the sheriff, whose help she needs—indeed, while he’s in the middle of helping her—he remarks, “We hunters do the forest a favor, you know. If it wasn’t for us, the deer would become overpopulated and sick.”

She responds by condemning him:

“Actually, if it wasn’t for people like you and your ancestors who were the same way, the forest would still have its natural balance of predators and prey. Wolves and mountain lions would keep deer and elk populations in check. But you’ve wiped out most of the predators, so now you think it’s up to you to cull the herds. Predators like wolves and wolverines remove weak and sick individuals. Human hunters take the healthiest, most magnificent specimens out of a group. The dark truth is that you enjoy it. You enjoy the thrill of the kill. Otherwise, if it was really the health of the forest you were so interested in, you’d be doing your damnedest to ensure healthy predator populations, not shooting them on sight.”

Her words may be true, but firing them like a weapon at someone in law enforcement is a poor way to invite the cooperation and compromise needed to balance opposing interests (never mind inspire someone to watch your back).

This behavior is one example of Alex’s character contradictions. As sometimes happens with people highly focused and expert, their social graces fall short. Alex often demonstrates a naivete about people, and obtuseness about non-wilderness reality, that make her difficult to credit and sometimes unsympathetic. Billboard-level signals that readers might recognize as warnings—this guy’s a loser! that situation is dangerous! you’re setting yourself up for a fall! don’t go in the basement!—sail right by her, or else she is maddeningly slow to react and understand.

It comes as no surprise when she gets sucked into a situation that leads to worse and worser situations, ultimately life-threatening. Only when things ramp up that high does she come into her own.

Part of this is caused by lumps in the narrative arc. While yes, the plot proceeds steadily, Alex’s backstory does not. Important information that would help frame her character at the outset comes late, in conspicuous chunks instead of a smooth melding. Experienced thriller readers will identify some of those chunks as foreshadowing needed to support the climax.

All the pieces make it into place before the story explodes into a gruesome and violent crisis in horrible weather. Alex comports herself magnificently—and ingeniously—in a long and dramatic outdoor chase scene. The novel is worth reading just for that!

Is it worth it for the rest? Only your taste in suspense novels and character types will tell. There should be plenty of opportunity to decide, as this is first volume of a new series. In it we learn a lot about wolverines and other flora and fauna of the Rocky Mountains. It’s easy to understand why Alex feels called to the wild. Not so easy to understand other parts of her, but hopefully her next adventure will give us more.