A Soldier on the Southern Front: The Classic Italian Memoir of World War I 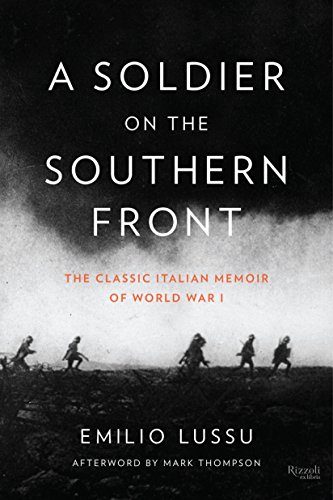 “Though some of the fierce battles may be very disturbing for some readers, any avid student of history, particularly military history, will be enthralled with A Soldier on the Southern Front.”

Readers of A Soldier on the Southern Front who have never fought in a war may struggle intensely with the emotional toll, physical agony, and the heinous horrors of battle. Those who have participated in a war may find emotion triggered by their own memories.

Author Emilio Lussu, a decorated officer in World War I, composed this vivid memoir from his “personal recollections.” The original edition was published in Italian in 1938; however, in his Author’s Notes, Lusso assures the reader that “this testimony of war” has not been changed from the originally published account.

Lussu specifically refers to this book as one that “is intended merely as an account of an Italian witness to the Great War.” He further states, “In Italy, unlike France, Germany and England, there are no books about the war.” Thus, this book is his very personal account of the events as they happened on the ground.

Lussu penned this memoir while recuperating from a diseased lung contracted while he was in prison during the war. His recollections of each battle, sound, scent and dialogue among his fellow soldiers is uncanny.

One poignant memory of his time at war is expressed in the following utterance preceding a horrendous conflict. “I can remember the dominant idea of those initial minutes. More than an idea, an agitation, an instinctive impulse: Save yourself.”

Lussu’s stint in WWI began as a lieutenant in March of 1915. Like many other soldiers fighting with him, he hailed from the island of Sardinia, located in the southern part of Italy. The mission to stop an Austrian offensive was both continuous and brutal. He explained that “every square foot of terrain reminded us of a battle or the grave of a fallen comrade.”

The structure of forces and the chain of commands in the Italian army were quite intricate and well organized. The troops were comprised of about 6,000 men while each division was led by a major general. Each of the four armies was commanded by a general and supervised by the “Supreme Command” ranked at the top of the hierarchy. All daily orders including motivational lectures came from the very top echelon.

In A Soldier on the Western Front, the reader quickly learns that Author Lussu can personally attest to both the brutality of war but the attitude of soldiers in the midst of an armed conflict. As he so succinctly states, “In war you don’t think about tomorrow.” This is quite evident throughout the book as tales are told about the endless drinking binges and the willingness to go to great lengths to obtain both cigarettes and alcohol.

In addition to watching their fellow soldiers being slaughtered, the survivors are often wounded both physically and emotionally. And they are exhausted beyond what most of us can fathom. Many people are aware that men in wars have not often discussed their private battles or emotional scars when they return home. In A Soldier on the Southern Front, that fact is quite apparent. Though this has changed to a degree in recent years the stigma still remains for many who have served their country.

Lussu describes his experiences poignantly and with great wisdom. He adeptly captures   riveting dialogue and the individual suffering of his own as well as his comrades with great ease. His description of the hope each soldier has that one day the war would be over can be deeply felt by the reader.

As one devours each page of A Soldier on the Southern Front the reader can feel the depths of emotion on the battlefield. As each man holds his breath, he knows that in war any single moment can seem like an eternity. And the reader begins to absorb that fact very quickly.

Though some of the fierce battles may be very disturbing for some readers, any avid student of history, particularly military history, will be enthralled with A Soldier on the Southern Front. Finally one might say in Italian, “questo libro non sarà presto dimenticato” which means this book will not soon be forgotten.