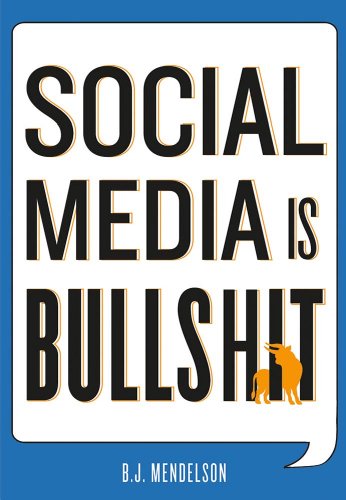 “If you’re a social media junkie, read it and weep.”

At the time of writing this review, the world’s most popular websites are all corporations, most based in the U.S., usually New York or California. The top five blogs are based in New York. The top 10 Twitter accounts are made up of nine celebrities and one celebrity politician (Barack Obama). All are U.S.-based. Spot a trend here?

B. J. Mendelson has. And he thinks it’s all bullshit.

To be clear, it’s not so much the domination of big corporations and big names on the web rankling Mr. Mendelson. It’s really the fact that their omnipotence highlights the lie behind the social media boom we are currently experiencing.

The audience-as-producers line looks a little shabby when put up against such evidence that big players on the Internet, as elsewhere in the media and marketing universe, dictate.

The concentration of the world’s major web and social media heavyweights in a few urban enclaves in the U.S. is indicative of the failure of social media to stretch the world’s imagination or serve as a harbinger for a new world order as some had thought it would.

The author emphasizes the continuing value of personal relationships in business and in general, and with the big players congregating so tightly the margins are very wide indeed.

The upshot is that small independent content producers—whether bloggers, video producers, or entertainers looking for a break—have about as much chance being struck by lightning as creating lightning in the apparent free-for-all social media is meant to encourage.

The politics of social media run as an undertone to Mr. Mendelson’s thoughtful and provocative book. What seems most irksome to the author is that fact that even the efforts of the big players in business to use the marketing potential of social media are failing to make an impact on sales.

Massive expenditures and time investments have yielded virtually nothing—even for those claiming their own “social media success” headlines.

None will admit to it because social media is all the rage and everyone wants to be seen as part of it.

Mr. Mendelson reserves his most heated remarks for the super-consultants who oversee this pile of you-know-wha—and who profit enormously from it.

The Cyber Hipsters, as he calls them (and yes, he does name names and does hold some of their actual claims up to the spotlight), are perpetrating a massive sham on both their generous corporate clients and on the naive masses lapping up all their swanky patois and buzzwords.

For anyone who has waded into the social media morass in search of fame and fortune (c’mon you know who you are), or just looking for some kind of identifiable return on what is supposed to be the biggest marketing game in town, Social Media Is Bullshit is a refreshing and sobering take on it all. It’s comforting in a way to know it’s not just those who have gotten lost out there (your reviewer included) to know that it may not be Us after all. It is likely to be Them.

Mr. Mendelson backs his assertions with solid research and numerous case studies. He is a player who knows his game.

The title gives a hint to the style and approach Mr. Mendelson adopts. There’s a lot of schoolyard slang and asterisk worthy words for the linguistically fainthearted to swoon over. But if taken with the right dose of openness and humor, the expletives don’t seem gratuitous. For instance, Mr. Mendelson’s Asshole-Based Economy model is not only well conceived, but very well named based on the case he makes.

This standup format wavers a little on occasion. At one stage, for example, Mr. Mendelson anarchically outlines a means by which to scam ones way into the social media pantheon, largely by virtue of some shonky practices and ruses.

On one level, this comes across as irresponsible—serving the very beast he is excoriating.

On another level, media insiders will detect an oversimplification in his cookie cutter model, of the kind tends to contradict some of the author’s own arguments.

Mr. Mendelson is at his best when taking his lance to the many and varied windmills in the social media landscape. Yet he seems bereft of ideas when it comes to solutions. But part of his endearing approach is that he ’fesses up and admits he is not sure where to take it all.

There are going to be some hearts broken by Mr. Mendelson’s no-holds-barred assault on social media, its flaky ideals, and its monied mavens in their puffed up world, inflated by their often risible consulting tricks.

Social Media Is Bullshit spiritedly challenges and pops bubbles and preconceptions defining just what Web 2.0 and the social media “revolution” are.

If you’re a social media junkie, read it and weep.