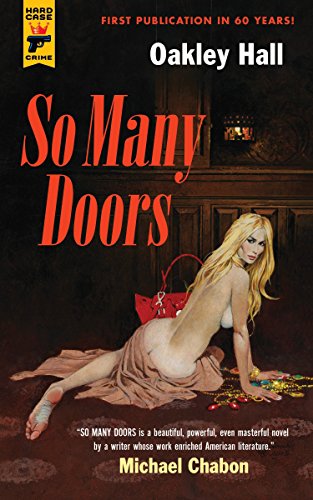 “A new generation of aspiring novelists would do well to read Oakley Hall’s work with all the care and attention to detail it deserves. So Many Doors is an experience they won’t want to miss.”

Jack Ward sits on Death Row, convicted of murdering his long-time lover, Vassilia Caroline Baird, known to everyone as V. When the lawyer assigned to him arrives at his cell, Ward refuses his services and strikes him, breaking the man’s glasses. Alone once again, Ward eyes the shards of glass on the floor and laughs, thinking that in a minute he’ll stop laughing and smoke one more cigarette.

Originally published in 1950, So Many Doors was Oakley Hall’s second novel, the first published under his own name by Random House. Over the course of his career, Hall produced more than 20 novels, including six westerns, of which Warlock was a Pulitzer Prize finalist.

A leading west coast novelist, he taught creative writing for many years at the University of California, Irvine. He also helped found the Squaw Valley Community of Writers in Nevada City, where his pupils included Amy Tan.

Fans of Hard Case Crime, whose list includes reprints of some of the best mid-20th century noir and hard-boiled crime fiction, must understand that while So Many Doors revolves around Jack Ward and the murder of V, it must be read as a first-class example of psychological suspense rather than as a straight crime novel.

Hall tells the story of the relationship between Ward and V through multiple points of view over the course of the novel. He begins with V’s father and the tension between them as she approaches sexual maturity, and continues through the viewpoints of three different close friends as the years pass before concluding with Ward himself.

Hall would use this technique again, notably in the better-known Corpus of Joe Bailey (1953), which drew much scandalized attention when Judy Garland was seen at the Kentucky Derby that year with a copy of it under her arm. It’s a narrative approach that allows Hall to examine the relationship between Ward and V from multiple perspectives, probing at the psychological tensions among the characters and heightening the suspense surrounding the star-crossed lovers and their ultimate date with destiny.

Hall’s exploration of each scene is thorough and unhurried. He writes with a master’s attention to detail and a keen sense of the power in imagery, effectively using small details to establish the atmosphere of each scene.

For example, in the early section told from the point of view of Ben Proctor, Ward’s friend and roommate, Ben enters their room to find V sitting on Ward’s bed. He’s never seen her before. Jack comes in, carrying a paper sack containing bourbon and ginger ale. The tense, sexually charged episode that follows assaults Ben with a series of powerful images.

Jack removes the bottles and “The empty sack toppled over and fell to the floor,” where it’s forgotten. When Ben looks at V, “Everything she felt was on her face for him to see.” In the nearby train yard he could hear the freight trains moving slowly along the tracks. As he throws together some things to stay elsewhere that night, Ben drops his toothbrush on the floor, “and, stooping to pick it up, he felt furious; at the toothbrush for falling, and at Jack and V.”

Powerful images that anticipate the emptiness and inevitability of the hopeless future Ward and V face, and the despair experienced by Ben, caught between them.

While the novel has its salacious overtones when Hall focuses on V’s sexual power and Ward’s strong physical presence, a dimension typical of paperback novels of the period and amplified here by the striking cover art created for this edition by famed illustrator Robert McGinnis, So Many Doors is nonetheless a remarkable study in psychological suspense worthy of this reissue.

A new generation of aspiring novelists would do well to read Oakley Hall’s work with all the care and attention to detail it deserves. So Many Doors is an experience they won’t want to miss.