So High a Blood: The Story of Margaret Douglas, the Tudor that Time Forgot 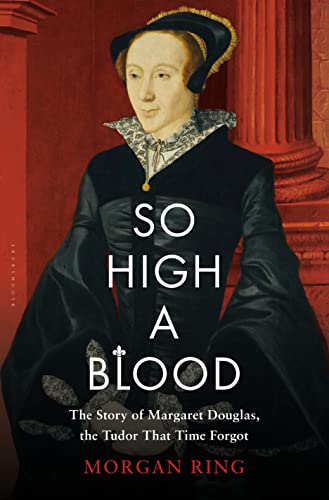 The blood soaked epic rise of the Tudors from powerful family to self-made royalty is one of the great political dramas in history. It has an appropriate share of drama queens, too, sometimes quite literally.

It is a story often told, from Henry Tudor to his granddaughter Elizabeth I. These all too human rulers abandon the ancient faith of England (and try to bring it back), lose France, conquer Ireland, begin English America, and battled the Spanish Armanda. They laid the foundations for our real new world.

Margaret Tudor surely just missed being the subject of a Shakespearean play. Her life began well enough, first as an English princess then as a Scottish queen and mother of the future king. Morgan Ring writes in So High a Blood that she from age 13 on "grew into her role" and "played the part of queen consort adeptly."

Fate dealt this Queen of Scotland a series of terrible blows, however, whereby every advantage she was given was turned against her. Her problems began when she lost her husband in battle with the troops of her brother England's Henry VIII. Her loyalty to England or Scotland was as often questioned as that of Scotland to France and England to Spain.

When Margaret remarried to Scottish Earl Archibald Douglas, Scotland's ruling class had her sons taken from her. In the years that followed, she repeatedly found herself a prisoner or a refugee.

So High a Blood, however, is primarily about Margret Tudor’s daughter Margaret Douglas. They were in the shadow of greatness, their descendants included monarchs of England, Ireland, and Scotland. This volume rightly opens with a series of genealogical charts.

Only for certain periods did Margaret Douglas know peace and security. Her father was exiled from Scotland, her mother was trapped in the same, and she was sent to live with her uncle Henry VIII just before his one wife was famously about to become, in succession, six. She would be imprisoned in the infamous Tower of London.

Margaret Douglas "transformed herself into a powerful, political noble woman." Although considered by some scholars as only a mother trying to do the best for her noble birth children, to other writers she was, like her mother, an underrated conniving player in the great game.

What Margaret did was to survive as courtesan, mistress, mother, wife, and spy in the very dangerous world of the Stewarts of Scotland and the Tudors of England. It was a saga of ambition, battle, betrayal, execution, loyalty, religion, and sex.

Having lived through so much by her wits, this Margaret had nothing else to show for it in the end, not even some of the notoriety of her famous family. Her story is a metaphor a Great Britain that then only existed as a nebulous ambition, of the very different parts of Tudor England and parts of Stewart Scotland. Those forces of conflict remain with us to this day.

Morgan Ring had a formidable task in telling this complicated lost history. She merges the familiar with the forgotten to tell one of the most well-known family sagas of all time from a different perspective. The reader will find the story gripping and a read that is mercifully less confusing, but a far faster story, than a typical Tudor television melodrama.