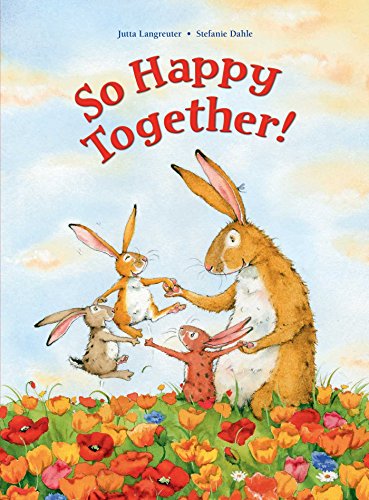 This book is a warm tale about sibling rivalry and the importance of family.

So Happy Together tells a tale of sibling rivalry and jealousy. Brother Brayden Bunny is excited to show friend Lena his “his secret hiding place today—the one with the carrots.” But Lena is playing with his sisters, not him. This puts Brayden in a “bad mood. A very bad mood.” He slumps on a stump, clearly upset.

The girls weave flowers behind their ears, have a tea party, and sing; activities Brayden thinks are silly. Then the girls play hide-n-seek. Lena invites Brayden to play, but he refuses. Instead, Brayden sabotages their games by helping the seeker find the hiders. The siblings argue and then the girls walk away. Brayden tells the girls, “[Go] As far away as possible!”

Later, while playing trains with another friend, Brayden learns a storm is approaching. Knowing his sisters are afraid of thunder and lightning, Brayden runs off to bring them safely home. A mouse tells him the girls are at the river, but once there a squirrel says they are in the big field. Not finding them, Brayden runs to the treehouse.

So Happy Together depicts the dichotomy of the brother-sister relationship very well. Brayden is angry and jealous his friend is playing with his sisters and not him. Brayden sulks. His body language clearly shows his anger and his jealousy. Parents will clearly see their children in this story. Brothers and sisters will see each other. Anger, jealousy, and fighting are all inevitable in a family with two or more children. Langreuter and Dahle both seem to understand the sibling relationship.

The illustrations are wonderful and whimsical. While the animals can all talk, none wears clothing, with the exception of headwear. Mommy Bunny wears a rain bonnet made of leaves held over her head by sticks. Brayden wears a conventional cowboy hat, and his friend Benny wears a colorful headdress while playing with the train (robbers are going to steal the gold load from the train). Benny looks cute dancing while wearing the headdress, but this scene will upset some people.

When Braden says he needs to find them, Benny Badger reminding Brayden he is upset with his sisters. Brayden’s reply would have been more sincere if it had not sounded scripted. “Brothers and sisters have to look out for one another. They’re all one family.” Something simply such as, “because they’re my sisters” says the same and sounds genuine.

The same holds true for the ending. One of the sisters starts crying, giving Lena the opportunity to ask why. The scene and the one following drag out the end in order to stress two messages, just in case kids missed them in the story. My brother is brave (he came for us when he was scared) and he is nice (he shared his secret carrot stash). Both were evident by the action.

Between the four bunnies, sibling rivalry plays out well, with the added touches of arguing and making trouble keeping the story honest. For a picture book geared toward young children it is quite wordy. Some children may not have the patience to sit through all the stretched out scenes. Adults will love the ease of reading and playing the different bunny voices can be fun. The illustrations give everyone much to look at and enjoy. Overall, So Happy Together is a nice family drama, perfect for any time of the year.