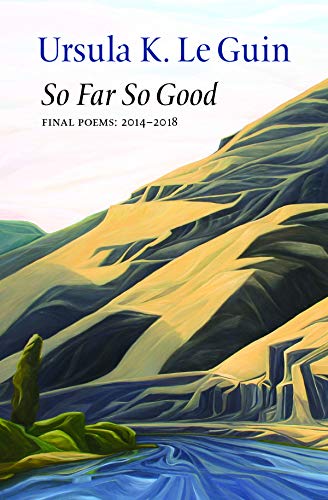 In the September 26, 2002, issue of The New York Review of Books, in an article rather marvelously entitled “The Queen of Quinkdom,” Margaret Atwood tackled Ursula K. Le Guin.

After acknowledging the fact that Le Guin is/was best known for her science fiction, and after placing her in context of other “virtuoso” and “linguistically inventive” purveyors of the art form as Vonnegut and Ray Bradbury and Russell Hoban, Atwood strikes to the meat of it, and writes, of Le Guin:

“No question of her literary quality: her graceful prose, carefully thought-through premises, psychological insight, and intelligent perception have earned her the National Book Award, the Kafka Award, five Hugos, five Nebulas, a Newberry, a Jupiter, a Gandalf, and an armful of other awards, great and small. Her first two books, Planet of Exile and Rocannon’s World, were published in 1966, and since then she has published sixteen novels, as well as ten collections of stories.”

In other words, Le Guin managed, in the decades in which she created many worlds, many cultures, with many genders and many variants of day and night, oxygen-blended atmospheres and velocities of rotation, to not only succeed at writing science fiction, but also managed to transcend it in novels like The Lathe of Heaven and The Left Hand of Darkness.

In the culmination of her consideration of all things Le Guin, Atwood gives a quote of the sort that causes publishers to kvell, and that become the basis of author public relations presentations (and literary projects) for years to come.

“Whatever else she may do—wherever her curious intelligence may take her, whatever twists and knots of motive and plot and genitalia she may invent—she never loses touch with her reverence for the immense what is.”

This is perhaps the seed within the shell, the nut-meat within the nut, when it comes to contemplating Le Guin. Because it is this aspect—as native to her writing as the sense of the absurd is to Vonnegut—this connection to creation, that is the connective tissue that binds together all that our author wrote in her decades of output.

Strange, though, that Margaret Atwood, in issuing such a resounding paean to Ursula Le Guin and all her many genres, many works, from short to novel-length fiction, to YA fiction to essays to books on both how and why to write, should leave out Le Guin’s many contributions to another form of creative writing—and the one in which her connection to “the immense what is” is most apparent.

Perhaps there is a curse of sorts that is placed upon writers who become too successful at some specific sort of writing, because their talents for other things are all too often ignored.

Such is the case here.

How many, after all, are aware that, while Le Guin sort of burst on the scene as a novelist and science fiction writer in 1966, she had actually been first published as a poet back in 1959? Or that the eight collections of poetry that she produced over the years would have, all on their own, established her as a poet of note, had she never written any prose along the way?

Indeed, while writing her marvelous fiction seemed always to expand her world, creating poetry seemed always to be the means by which Ursula K. Le Guin defined it. The one form of writing was exploratory, the other, meditative, contemplative, and revelatory.

Back in 2012, Le Guin published what was very likely seen as her last book of poetry. Called Finding my Elegy: New and Selected Poems, it gave its readers a chance to look not only at the author’s development as a writer, but also her philosophical development as well. And as the titular search for a proper elegy indicates, it did so with something of a summing-up attitude.

But now, today, we have been given the gift of one more, one last, collection, with perhaps the saddest of subtitles.

So Far So Good: Final Poems 2014–2018 is that wonderful thing, the manuscript hidden in the desk drawer, lost and then found, the sheaf of ditties, bound in old lace, stored away up in the attic.

And its brief section of Acknowledgments, written by daughter Caroline Le Guin, tells us this:

“Ursula sent off her revised manuscript for So Far So Good for copyediting on January 15, 2018. She died January 22. This book, then, is the last collection of her poetry she would edit; it is her farewell.”

And how churlish it would be, given all this, what with the awards and the praise and Margaret Atwood and all, to sit in judgment of Le Guin’s farewell and find it lacking.

Happily, we have no such problem to wrestle with, as So Far So Good, Le Guin’s farewell poetry collection, contains all that created her reputation for fiction—sharp insight, restless imagination, humor that is both mordant and humane, and, above all else, that connection to all creation, that “immense what is.”

Day and night are much the same

To them in the pastures of summer,

Cows and claves, they crop and pull

With that steady, comfortable sound

As the light in the rimrock and the sky

Dims away slowly. Now no wind.

I don’t know if cattle see the stars,

But all night long they graze

And walk and stand in the calm

Light that has no shadows.”

Or consider, from “July:”

“The valley oak above the barn,

Dying a huge branch at a time,

With the warm light that has fed its leaves,

The dark waters that have fed its roots,

Its acorns that have fed the woodpeckers

Or, finally, consider, from “It Used to Be:”

“I am wise to seasons now. I foretell and altered light,

Observe the Solstice and the Equinox,

Am eased by the majestic order. I am old.

Yet still when fog from the river rises

Silent and unforeseen, and the bright morning is all gone

Into the uncreated, I rejoice.”

The quiet music of her words, the gentle acceptance of the nature of things, the sounds of cattle chewing, the power of fog to eradicate the structure of seasons, the hints of mortality in all the corners of the pages and in the spaces between the words, these are those connections to what is.

There are many collections of poetry that rail, that question, that fuss and stomp.  But few that are as knowing, as accepting.

Few that, in a poem called “Words for the dead,” contain thoughts like these:

“To your soul I say:

With none to hide from

Of the great house.”

While many other poets might join Le Guin in finding inspiration in old age or in the physical beauty of the Pacific Northwest, few would, I think, find it in Lt. Bligh set adrift in his little open boat after having become so very unpopular with the crew of the Bounty.  And yet Le Guin does, with a dozen dandy poems. (“I set out on the everyday/with a watchful heart./Sunset/my only harbor.”)

Fewer still, I think, would allow Lot’s wife, in all her salty sinfulness, to come to represent the simple and awful cycle of life and death in the poem that perhaps best sums up the strengths of this collection. Perhaps other writers will find other ways to deal with the shock and awe of mortality. Le Guin places it within the context of a woman whose sin it was to look backward:

“Remember me before I was a heap of salt,

The laughing child who seldom did

As she was told or came when she was called,

The happy woman who loved her wicked city.

Do not remember me with pity.

Saw you plodding on ahead

Into the desert of your pitiless faith.

Those springs are dry, that earth is dead.

I looked back, not forward, into death.

Forgiving rains dissolve me, and I come

So Far So Good is a lovely way to be able to remember Ursula K. Le Guin and to be reminded of all the many wonderful things, including that corpse dissolving in the rain, that she has left behind.